America’s counterculture is alive and kicking – and dancing

Michigan Letter: ‘It makes you wonder why people can’t be like this all the time in society’ 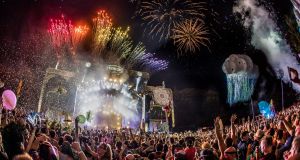 The hatchet-faced Michigan state troopers stood with arms folded in immaculate uniforms, marking the turnoff from the main road to the Electric Forest dance music festival entrance. They didn’t return our waves from the car.

But once inside the festival grounds in Rothbury, guided by smiling festival staff giving peace signs and wishing us a “Happy Forest”, we broke free from the shackles of conformity.

A tented city emerged in giant fields surrounding the main venue comprising a mixture of woodland – so-called Sherwood Forest – and grassland kitted out with seven main stages, and all decorated to look and feel like something between a fairy tale and an adult playground.

The sense of escapism was compounded by the near omnipresent smell of marijuana that didn’t let up for the following four days of dance music mayhem, accompanied by the spaced-out dreamy faces of revellers, many of whom were taking far more than cannabis.

Describing the fashion choices on show would take a whole article itself. It spanned beach wear to mediaeval-style hoods and cloaks to sci-fi style to frightening mankinis.

All this was set to the tune of non-stop booming bass and driving beats from the professional DJs’ decks, and also from across the entire encampment, as people held tent parties and staged impromptu amateur DJ sets at enormous camper vans in the RV park.

Ever since America’s counterculture peaked at the end of the 1960s, many have lamented its demise in the face of increasing dominance by a market-driven society immersed in fear-soaked orthodoxy.

But at Electric Forest I saw how America’s counterculture, while not as visible these days, is still hanging in there against the sway of profit margin, with plenty of Americans not giving in and wanting to stick it to the Man.

Such modern-day rebels exist even among Millennials, those young things born between 1981 and 1986 and much maligned as the snow-flake generation, apparently taking fewer risks and having less booze and sex than their forbears.

Well, from what I saw they certainly aren’t shy of mood-enhancing stimulants. I saw crowds gathered around a man at a kiosk advising on how to test that drugs weren’t cut with more dangerous substances, while the cry of “smack it!” accompanied bags of wine taken out of box packaging and held high as a cascade of red wine flowed into the mouth of someone below who afterwards smacked the bag in celebration.

Perhaps the clearest example I encountered among the festival crowds of Millennials sticking it to the Man was their embracing of the gig economy, no longer seeking a lifelong career and steady pay check, instead hopping between jobs and embracing lower pay and lack of security in return for greater freedom.

“What an amazing place this is – everyone is so friendly, helping each other out, sharing food and camping stuff,” reflected one reveller. “It makes you wonder why people can’t be like this all the time in society.”

It appeared the good vibes even managed to percolate through to the stern state troopers: I saw two of them – still immaculately clad – return fist bumps offered by two smiling dancing merry makers.

That image was perhaps most emblematic of what Electric Forest is – a hybrid of the mainstream and counterculture.

For despite all the individuality and free spiritism on display, it all ultimately occurred under the umbrella of a very professional and well-run business operation generating a lot of money from the 40,000 attending. My basic general admission ticket cost $350 (€305). There were much pricier admission options.

And though we were embracing a rustic simple camping life, the technological combination of sound, lighting and visuals at each of the main stages was astonishing.

As one danced with the masses, all facing the same way, equally enthralled, it was hard to differentiate between whether one was participating in a moment of wonderful solidarity and humanity, or rather succumbing to a brainwashed cult. I like to think it was more the former.

Either way, one thing I took away from the festival was that as much as the older generations lament the habits and mores of today’s youth, as the saying goes: “The kids are all right”. There’s much in their favour and that they are doing better than we who came before. Though, like everyone, there’s no escaping those existential rubs.

“People nowadays are scared of death and not willing to face life’s realities,” I was told by 28-year-old Matt, an army veteran in the tent next to mine who had just quit his IT job to freelance. “They are turning away from religion but haven’t found anything to replace it with – social media won’t do it.”