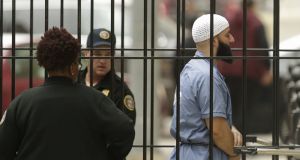 The murder conviction of a Baltimore man that was explored by the 2014 podcast ‘Serial’ was based in part on unreliable cellphone data, a forensic expert testified at a court hearing on Thursday.

Adnan Syed (35) was convicted in 2000 of kidnapping and strangling his ex-girlfriend Hae Min Lee (18) and is serving a life sentence. He is seeking a retrial based on new evidence about his case amid questions about the fairness of his conviction raised by the podcast.

Gerald Grant, a communications forensics expert, testified in Baltimore City Circuit Court that jurors should have been told that AT&T cellphone records used to place Syed at the site where Lee’s body was buried were flawed.

The AT&T engineer who testified in the original trial was not aware that outgoing phone calls were reliable but incoming calls were not, he said. A sheet accompanying the faxed records included that disclaimer but was misplaced or overlooked.

“There were instructions that should have been followed,” Mr Grant, who examined the case’s evidence and files, said under questioning from C. Justin Brown, Syed’s lawyer.

The engineer in the original trial has filed an affidavit saying that if he had known about the disclaimer, his findings might have been different

Grant said during the second day of the three-day hearing that Syed’s case was among the first to include cellphone location technology.

A second witness, Asia McClain Chapman, a high school classmate of Syed’s, testified that he was calm when she met him at a library the day on which Lee later was reported to have gone missing. She said she was never contacted to provide a possible alibi at his trial.

Prosecutor Thiru Vignarajah pressed Ms McClain Chapman about her recollections and focused on letters she wrote Syed after his arrest.

In one, she wrote, “I have reason to believe in your innocence.” Ms McClain Chapman also denied that Syed had helped Ms McClain write a second letter which contained details of the case.

Lee’s slaying was the subject of ‘Serial’ which began in October 2014 and was released by Chicago public radio station WBEZ.

The hearing will weigh potential evidence that was not used in previous proceedings or may have been misinterpreted, and the court could order a new trial.