5 takeaways from the US midterm elections

The voters are mad as hell, writes Denis Staunton 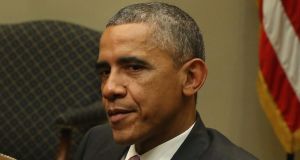 1. The voters are mad as hell...but Republicans are less crazy than before. Tuesday’s heavy losses by Democrats in the Senate, the House and governors’ mansions were fuelled by deep popular discontent over the direction of the United States and growing anxiety about everything from Ebola and Islamist terrorism to declining living standards. Polls show that voters take as dim a view of Republicans as of Democrats but Republicans were better placed to take advantage of the popular mood in 2014 than they have been in recent years. This owes much to the quality of the party’s candidates this year, most of whom were mainstream figures rather than Tea Party firebrands.

In 2010, Democrats beat the odds by holding a Senate seat in Delaware after the Republican candidate Christine O’Donnell released a campaign ad beginning with the words “I am not a witch”. Two years later, Missouri Republican Senate candidate Todd Akin threw away his race when he suggested that, in cases of what he called “legitimate rape”, women’s bodies would spontaneously block an unwanted pregnancy. This time around, no incumbent Republican lost a primary challenge to the Tea Party and the move to the mainstream paid off handsomely on Tuesday.

2. Barack Obama is a beaten docket...but Obamacare is here to stay.

All two-term presidents struggle to remain relevant during their last two years in office and the loss of the Senate will make Barack Obama a lonelier figure than ever in Washington. Never inclined to cultivate relationships on Capitol Hill even with his own side, Obama is unlikely to make much of an effort to forge a relationship with Mitch McConnell as Senate majority leader. Despite McConnell’s call for co-operation with the White House, Republicans will use their congressional majority to block even more of the president’s nominations to the judiciary and other public offices. And although the party leadership knows that Obamacare, the president’s healthcare reform, cannot be repealed, some Republican lawmakers will seek to chip away at it. They will fail, firstly because Obama can veto any such move and secondly because opposition to Obamacare among Republican voters is diminishing as the new healthcare system beds down and attempts to undermine it could prove unpopular.

3. Americans are afraid...and Congress is getting more hawkish.

After a number of years during which Democrats capitalised on voters’ weariness with the apparently endless wars in Iraq and Afghanistan but the video of Islamist extremists beheading journalist James Foley has persuaded a majority of Americans to back military strikes in Iraq and Syria. Most support the Obama administration’s strategy against the terrorist groups but the renewed appetite for military action helped to boost the fortunes of Republican Iraq veterans such as Joni Ernst and Tom Cotton, who won Senate seats in Iowa and Arkansas respectively. The Republican victory means that arch-hawk John McCain is set to become chairman of the Senate Armed Services Committee, a powerful perch from which to influence the pentagon and the State Department.

Tuesday’s elections are not even over - Louisiana’s Senate seat will be decided in a run-off - but all eyes in Washington are already trained on the presidential contest in 2016. Over the next few months, presidential hopefuls will announce their bids, or form “exploratory committees” as a prelude to doing so. Republican senator and likely presidential candidate Rand Paul has sought to associate Hillary Clinton with Tuesday’s rout, pointing out that most of the candidates she supported went on to lose. In fact, Tuesday’s result boosts Clinton’s chances of winning the Democratic nomination in a number of ways. Now that Republicans control both the Senate and the House of Representatives, this ultimate Washington insider can campaign against Washington without directly targeting Obama. The electorate’s comprehensive rejection of Obama suggests a yearning for managerial competence rather than visionary zeal, creating an electoral environment more fertile for Clinton than, say, Massachusetts senator and liberal darling Elizabeth Warren. Meanwhile, the shock defeat of Anthony Brown in Maryland’s governor’s race is a blow to his patron, outgoing Maryland governor Martin O’Malley, a potential rival for the presidential nomination. Another potential challenger, New York governor Anthony Cuomo, won re-election on Tuesday but is embroiled in an ugly corruption scandal.

5. Republicans should enjoy their Senate majority...because it may not last long.

This year’s mid-term elections favoured Republicans because so many Democratic incumbents were defending seats in predominantly Republican states. Next time, the situation will be reversed, with many Republican incumbents up for election in states won by Obama. Democratic voters tend not to turn out for mid-term elections but their enthusiasm jumps dramatically when they are choosing a president as well as a congressman or senator. This is especially true of African-American and Hispanic voters, two groups that were key to the coalition that returned Obama to the White House in 2008 and 2012.