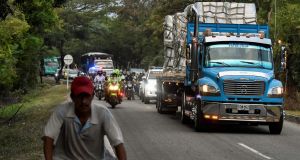 Trucks loaded with humanitarian aid for Venezuela arrive at the Tienditas Bridge in Cucuta, Colombia, on the border with Tachira, Venezuela. Photograph: Luis Robayo/AFP

The United States has ramped up the pressure on Venezuela’s president Nicolás Maduro by saying it is establishing an air bridge to fly in humanitarian supplies to Colombia’s border with the crisis-stricken South American nation.

US airforce C-17 cargo planes landed at Cúcuta airport on Saturday carrying kits to treat up to 3,500 suffering from malnourishment and other supplies with the US embassy in Colombia saying “[A]dditional US military flights will take place over the coming days”.

It is the second shipment of US aid this month to reach the Colombian border city that is the main exit point for Venezuelans fleeing a deepening humanitarian crisis at home. It comes a week ahead of plans by the Venezuelan opposition to transport the supplies into the country. The Maduro regime denies there is a humanitarian crisis in the country and claims the aid operation is orchestrated to create a pretext for a military intervention in the country by the Trump administration in support of opposition leader Juan Guaidó.

Mr Guaidó declared himself interim president last month in the boldest opposition move to topple the populist Chavista regime from power since a disastrous coup attempt in 2002. He has since been recognised by 50 countries and has received strong backing from the Trump administration.

Mr Guaidó has ordered the Venezuelan military to ignore Mr Maduro’s command to block the aid’s entry in what appears to be a bid to cause a split between the embattled president and one of his last pillars of support in the country.

He reiterated his call for a mass mobilisation this Saturday to protect efforts to bring the humanitarian aid into the country. Mr Guaidó has warned that those who prevent its entry into Venezuela will be complicit in “genocide” and hinted that blocking it could establish the pretext for international intervention.

On Friday Venezuelan security forces reinforced its blockade on the Tienditas bridge over which Mr Guaidó’s team had planned to bring the aid into Venezuela.

Pro-regime militias are also reported to have reinforced their presence on the Venezuelan side of the bridge in a bid to sway locals from heeding possible calls by the opposition to mobilise there to receive the aid. Regional support for the aid operation comes as many Latin American countries are increasingly worried that the continuing collapse of the Venezuelan economy, which has almost halved since Mr Maduro came to power in 2013, could send millions more Venezuelans fleeing abroad. Three million Venezuelans have already quit the country.

Meanwhile, Venezuela’s foreign minister Jorge Arreaza confirmed reports that he held two secret meetings with Elliot Abrams, the Trump administration’s special envoy to Venezuela and who is a leading hawk calling for the removal of the Maduro regime. Mr Maduro has desperately been seeking international mediation since Mr Guaidó declared himself president but most regional governments and the Vatican have refused to engage, accusing him of negotiating in bad faith in previous rounds of diplomacy.