Popular coalition saw economy quadruple in size over past decade 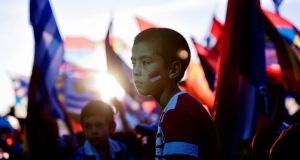 A young fan of presidential candidate for the ruling Broad Front party, Tabaré Vázquez, at a campaign rally for the movement in Montevideo, Uruguay. Photograph: Matilde Campodonico/AP

Uruguay is set to hand the ruling left-wing Broad Front movement a third consecutive term in office as a reward for overseeing a decade of huge economic expansion and steadily diminishing inequality.

The front’s presidential candidate Tabaré Vázquez is the clear favourite to win Sunday’s run-off after falling just short of an outright majority in last month’s first round of voting. Opinion polls during the last week of the campaign showed him on course to win 55 per cent of the vote with his opponent Luis Lacalle Pou of the right-wing National Party trailing with just over 40 per cent.

Lacalle Pou has been endorsed by his party’s historic rivals the Colorados, but in the first round the combined vote of the two parties was less than that won by the front, leaving him with an uphill task.

Vázquez has already served a term as president, having been the first leader from the Front sworn into the office in 2005. A doctor from the Socialist Party he famously continued to attend patients while in power.

Under the two men Uruguay’s economy has quadrupled in size thanks to global demand for its agricultural commodities and policies designed to boost inflows of foreign investment, and Vázquez has committed to keeping economic growth above 3 per cent a year should he return to the presidency.

One of his main proposals is to drive implementation of a new national care system that will expand and modernise public services for children and retired people. He has called the new system “profoundly revolutionary” and the principle challenge of a third Front government.

Lacalle Pou has sought to run a positive campaign, promising to maintain many of the Front’s policies. Aged 41, he has presented himself as a fresh face from a younger generation than that of Mujica and Váquez, aged 79 and 74 respectively. But as the son of a former president he is identified by many Uruguayans as a member of the country’s old political elite.

Vázquez has spent many of the final weeks of the campaign in the interior in what analysts say is a bid to maximise his vote and thus boost his authority within the Broad Front, where Mujica’s Movement of Popular Participation remains the largest single component.

A diverse coalition which includes Christian Democrats, socialists and communists as well as the former Tupamaro guerrillas of the MPP, the Front decides policy through high levels of internal debate and democracy.

That means that, despite his personal reservations, Vázquez is unlikely to reverse the legalisation of marijuana approved by Mujica. The law, which would see Uruguay become the first country whose government will oversee the legal production and sale of the drug, remains controversial and Lacalle Pou has promised to gut it should he win.

As well as marijuana, the Front has also legalised abortion and same-sex marriage, consolidating Uruguay’s position as South America’s most progressive society.