UN could have prevented deaths of 250,000 Syrians - Flanagan 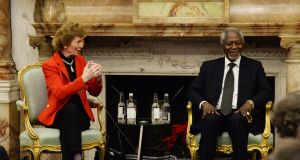 The murder of more than 250,000 Syrians could have been prevented if the five permanent members of the United Nations Security Council had acted more decisively, Minister for Foreign Affairs Charlie Flanagan has said.

He also said the UN should do more to respond to new threats by transnational terror groups that threatened the rules-based international order.

Speaking at an event to mark 60 years of Ireland’s UN membership, Mr Flanagan said belonging to the UN had enabled the State to lead in areas such as peacekeeping, arms control and human rights.

Men and women from the Defence Forces and An Garda Síochána, working “with honour and distinction” across the world since the first deployment to Lebanon in 1958, were a source of pride for the country, he said.

In 1968 Ireland became the first state to sign the Nuclear Non-Proliferation Treaty and, more recently the State was one of two co-facilitators for the Sustainable Development Goal negotiations in New York.

But while the UN had made a huge impact in improving the lives of children, refugees and the world’s poorest people, for example, Mr Flanagan said, its record showed some obvious and “inexcusable” failings.

“We cannot avoid the failure of the UN, and of the Security Council in particular, to fulfil its duty to uphold the [UN]charter in Syria, ” he said. “The murder of over 250,000 Syrians, principally by their regime, and the displacement of millions could have been prevented were the P5 states (permanent members) prepared to act more decisively. The costs to Syria, the Middle East region and now to Europe as well, far exceed what narrow interest drove such paralysis.”

The five, veto-wielding permanent members of the security council are China, France, Russia, the United States and the United Kingdom.

Former UN secretary general Kofi Annan said Ireland was considered a “model member” that punched above its weight. On Syria, he pointed out that the security council members were “hopelessly divided” and unless they could unite progress was impossible.

Mr Annan stressed the need for reform of the council. Without bringing other large and emerging powers into the fold, the group risked losing its primacy and authority. “The P5 will resist reform, but reform will come. It may take time,” he said.

Former attorney general Peter Sutherland told the symposium that with one seventh of the world’s population now displaced, migration and the questions that sprang from it were a major global challenge. Pointing to states such as Turkey, Jordan, Greece and Lebanon, which have taken in a disproportionate number of refugees and migrants, he said the world had to ask itself whether responsibility was defined merely by proximity to conflict zones.

While some countries, including Ireland, were showing openness towards refugees, others were not. “History will judge this generation on how it deals with this challenge,” he said.

On how Ireland could use its voice more effectively, Mr Sutherland said it was important for small states such as this to “stand strong” on issues it felt strongly about and “sometimes rock the boat”, adding: “We have a voice that people will listen to.”

Former president Mary Robinson hailed the climate change accord secured in Paris last week as a milestone that, together with the UN Sustainable Development Goals, had made 2015 an important year of progress on climate and development. She said the UN needed more resources to meet its many mandates and criticised the manner in which the secretary general was selected by the permanent security council members in “a very closed process.”

“I hope we will get a woman candidate and that we will have a woman secretary general,” she said.