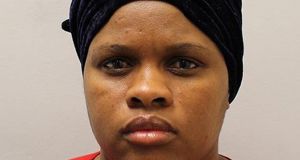 Joyce Msokeri (47) was sentenced for three counts of fraud and one charge of possessing a false document at the Old Bailey. Photograph: Metropolitan Police/PA Wire

Joyce Msokeri showed no emotion as she was sentenced for three counts of fraud and one charge of possessing a false document at the Old Bailey.

Judge Michael Grieve QC said: “These are callous and contemptible, indeed disgusting, offences for which only a custodial sentence can be justified, and one of some length.”

He added: “Your greed in taking advantage of the situation you had created was insatiable.”

Kate Mulholland, from the Crown Prosecution Service, said: “Joyce Msokeri has been sentenced today for fraudulently claiming money and accommodation intended for the true victims of the Grenfell Tower fraud.

“Her offences were not just about money but involved the exploitation of extremely vulnerable people, as well as the breach of trust of survivors, donors and relief workers.

“Our prosecution showed she persuaded one vulnerable man to pretend to be her husband as part of her scam.

“She also claimed her supposed husband had not died in the fire as she first thought, but had been living in a cave.

“This was all to satisfy her greed and she will now have to face the consequences of her dishonesty.” – PA