Eloise Parry went to hospital after she realised something was wrong 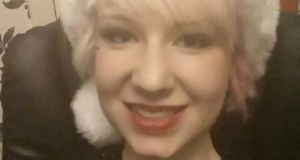 The mother of a young woman who died after taking “diet pills” she bought online has described it as “an awful way to die” as she urged others not to follow in her daughter’s footsteps.

Eloise Parry (21) died at the Royal Shrewsbury Hospital on April 12th after taking tablets that police believe included a quantity of the toxic pesticide dinitrophenol, also known as DNP.

Her mother Fiona Parry has warned others thinking of doing the same thing that if they take a similar dose there is nothing that medics can do.

She told Sky News that Eloise, from Shrewsbury, took herself to hospital after she realised something was wrong but the staff had been unable to help her.

“My message would be please don’t, please don’t take this drug,” she told the broadcaster.

“If someone makes the mistake my daughter did and takes too many of these pills, the doctors, the staff, if you go to hospital, if you go to A&E, they are not going to be able to get them out of your system.

“They will take their toll and it is an awful way to die. They cause you to overheat. they cause your kidneys to fail, they are dreadful things and it is not something you want to do to yourself. I wouldn’t wish this on anybody.”

The Food Standards Agency has previously advised the public not to take any tablets or powders containing DNP, an industrial chemical which is not fit for human consumption.

West Mercia Police said yesterday that tests are being conducted on the pills but they are believed to include the substance. They warned the public of the dangers of buying substances online.

Chief Inspector Jennifer Mattinson said: “We are undoubtedly concerned over the origin and sale of these pills and are working with partner agencies to establish where they were bought from and how they were advertised.

“The coroner’s report will establish the exact cause of Eloise’s death but we urge the public to be incredibly careful when purchasing medicine or supplements over the internet.

“Substances from unregistered websites could put your health at risk as they could be extremely harmful, out of date or fake.”

Police are attempting to establish the circumstances of the sale of the pills and anyone with information that could assist the inquiry is urged to call 101.

Ireland’s medicines regulator, the Health Products Regulatory Authority (HPRA), said products containing Dinitrophenol are not fit for human consumption and have the potential to cause serious harm.

“To date, only a small number of tablets containing Dinitrophenol have been detained by the HPRA,” it said. “However, as the internet is an unregulated source of supply of slimming products and other medicines, we are concerned that products containing this substance may have been purchased by Irish consumers.”

Consumers who have taken products containing Dinitrophenol are advised to contact their doctor immediately if they are feeling any ill effects.