Ward work to be obligatory for student nurses in England 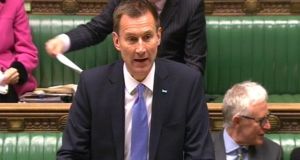 Nurses in England will have to spend a year on hospital wards washing and feeding patients before qualifying, under changes to be made after poor care in one hospital led to the early deaths of 2,000 people.

An inquiry into the Mid-Staffordshire Hospital scandal found that patients had been left to lie in their own excrement, left without water or food, while hospital managers obsessed about meeting Whitehall targets.

Since 2,000, nurses in England have taken three-year university courses rather than being attached to a hospital, whereas their predecessors spent as much time on the wards dealing with patients as they did in class.

Much of the work previously done by student nurses went to a cadre of health-care assistants, who are cheaper to employ than trained nurses, but it was felt that the change led to some recent graduates lacking the empathy to deal with the ill.

Meanwhile, Mr Hunt said the paperwork faced daily by nurses – who complain of unmanageable bureaucracy – is to be cut by a third.

Warning signals were evident in the Staffordshire hospital for a decade before the crisis erupted publicly: “The problem with Mid-Staffs was not that the problems were unknown; it was that nothing was done,” said Mr Hunt. “Ministers and managers in the wider system failed to act on those warnings. Some were not aware of them; others dodged responsibility. That must change.”

Hospitals will be given “a strictly limited” time to sort out problems once they become known. “If they fail to do that, they will be put into a failure regime that could ultimately lead to special administration and the automatic suspension of the board,” he said.

Hospital staff at all grades will now face a legal duty of candour, which could result in prosecutions if they do not raise the alarm about inadequate or dangerous conduct.

Labour, which was in power while care deteriorated in Staffordshire, complained that Mr Hunt has not established new regulations to improve standards among healthcare assistants.