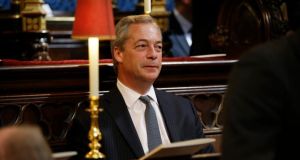 Ukip’s Nigel Farage at a VE Day 70th Anniversary service at Westminster Abbey, London. Mr Farage has had his resignation as leader of the party rejected by its national executive committee. Photograph: WPA Pool/Getty Images

Nigel Farage has had his resignation as Ukip leader rejected by the party’s national executive committee and he remains as leader.

Mr Farage announced in the wake of his defeat in South Thanet in last week’s UK general election that he would quit the post, as he had repeatedly promised to do if he failed to gain entry to the House of Commons.

Mr Crowther said: “As promised, Nigel Farage tendered his official resignation as leader of Ukip to the NEC. This offer was unanimously rejected by the NEC members, who produced overwhelmingly evidence that the Ukip membership did not want Nigel to go.”

Mr Farage recommended that Suzanne Evans, the deputy chairman, should take over until a contest is held in September.

He left open the prospect of returning to the role by competing in the election after taking the summer off politics.

“We have fought a positive campaign with a very good manifesto and despite relentless, negative attacks and an astonishing last-minute swing to the Conservatives over fear of the SNP, that in these circumstances, four million votes was an extraordinary achievement.

“On that basis, Mr Farage withdrew his resignation and will remain leader of Ukip. In addition, the NEC recognised that the referendum campaign has already begun this week and we need our best team to fight that campaign, led by Nigel.

“He has therefore been persuaded by the NEC to withdraw his resignation and remains leader of Ukip.”

Earlier today, Mr Farage took part in a TV debate on the BBC and was interviewed on Sky News, and took part in VE Day commemorations over the weekend.

Mr Farage insisted repeatedly ahead of and during the general election campaign he had no intention of staying in the leader’s job if he failed to get elected.

In his autobiography, The Purple Revolution, he wrote: “The consequences of me failing to secure a seat for myself in the Commons would be significant for both myself and the party.

“It is frankly just not credible for me to continue to lead the party without a Westminster seat.

“What credibility would Ukip have in the Commons if others had to enunciate party policy in parliament and the party leader was only allowed in as a guest?

“Was I supposed to brief Ukip policy from the Westminster Arms? No - if I fail to win South Thanet, it is curtains for me. I will have to step down.

He later said he would resign “in 10 minutes” if he lost the election.

Last Friday, his resignation statement followed within an hour of his constituency’s results.

Mr Farage said: “There hasn’t been a single day since 1994 that hasn’t been dominated by Ukip. I have tried to mix that with family, I tried for nine years to mix it with running my own business.

“It really has been seven days a week, totally unrelenting, and occasionally let down by people who perhaps haven’t always said and done the right things.

“So I feel a huge weight has been lifted off my shoulders.

“I haven’t had a fortnight’s holiday since October 1993, I intend to take the summer off, enjoy myself a little bit, not do very much politics at all.”

Mr Farage has left the role of Ukip leader before - quitting in 2009 only to return after Lord Rannoch oversaw a disastrous 2010 general election.

Ms Evans tweeted: “Very pleased Nigel Farage is still at the helm. As stated previously, I tried to persuade him to stay and was never actually appointed leader!”