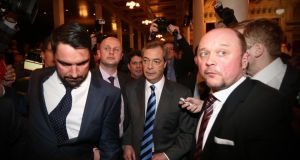 Sean MacPherson will throw knives at his girlfriend Dumitrita Tudorache as she spins on a revolving plate when “The Circus of Horrors” comes to Margate’s Winter Gardens next month. A week later, psychic Sally Morgan appears.

Gathered inside the ageing pavilion in the Kent seaside town, nearly 1,000 UK Independence Party members sharpened a few of their own knives, but they sought, too, to predict the party’s future in the May elections.

Channel 4 had levelled “falsehoods, innuendos and smears”, said chairman Steve Crowther, in its recent mock-documentary telling the fictional story of Ukip’s first 100 days in power – which ended in riots.

The press generally is accused of talking down its chances, since it predominantly argues that Ukip will get millions of votes but not enough of them in all bar a few constituencies to win seats.

Up to recently, polls reported that the party’s leader, Nigel Farage, would not win in South Thanet, the neighbouring constituency to Margate, a devastating result for the incumbent, if it were to happen.

Farage has been less visible recently, largely abandoning TV studios for camera-less campaigning in Ramsgate and Broadstairs, pitching himself as the man who will give locals a powerful Westminster “voice”.

His City career is downplayed. Instead of having been a commodities trader, Farage portrays himself as one who worked “with industry”, or bought and sold “things that go into our cars and washing machines”.

Such editing is not unknown amongst candidates, but it is at the higher end of the range. So far, it is working, doing much to ease the doubts that had begun to grow inside Ukip about his chances.

In ebullient form, Farage strode onto the stage, following an overnight flight from Washington DC, where he spoke on Thursday to a half-empty hall of US right-wing political groupings.

Ukip will be positive, it will “believe in Britain” during what will be “not just the longest election campaign in history, but the nastiest one, too,” he declared a little piously.

Despite the rhetoric, Farage indulged in his own dark arts, claiming that his enemies are “spreading rumours that I am sick” to exploit his recent low profile. If they did, few have heard.

“People want the politics of hope,” he declared. However, what Ukip will not give voters is a detailed manifesto, and the preparation of the one that it will give is running behind time.

So far, it is offering all things to all men, bar the Scots: £30 billion less taxes; cuts to the deficit and the £1.5 trillion national debt; more health and defence spending; an EU exit; less immigration.

However, rules that give Scots more public spending will be scrapped, though the rules help Wales and Northern Ireland, too. Overseas aid would be cut too, by three-quarters. “Help our own first,” said Welsh MEP Nathan Gill.

The Margate gathering, which continues today, has a number of ambitions. Firstly, the avoidance of self-inflicted injuries. Fringe meetings, the source of many an unguarded remark in the past, have been banned.

Secondly, it wants to exploit last year’s 298,000 net immigration figures – “enough to fill the city of Hull”. The numbers are more complicated, but no matter: they mock the Conservatives’ vow to cut immigration to the tens of thousands.

For Ukip, immigration translates into doorstep pitches about eastern Europeans cutting the wages, or taking the jobs of lowly-paid British workers. But it protests when painted as anti-immigrant.

“I am not anti-immigrant. Nor am I anti-immigration,” Peter Bucklitsch, a former Liberal Democrat, a 66/1 outsider to win a seat for the party in Wimbledon, told The Irish Times.

“How could I be? My son-in-law is Portuguese; my daughter-in-law is Chinese. My people originally came from Germany,” he goes on, but he opposes open-door immigration.

His joinery business fell to the recession, he says: “Between November and January in 2011 I didn’t sell anything, and the people who had been my customers were constantly undercut by Polish builders.”

In 2010, Bucklitsch ran for the Liberal Democrats, coincidentally in South Thanet. In 67 days, his new party’s future will be decided in similar, run-down seaside towns running all the way up to the Humber.