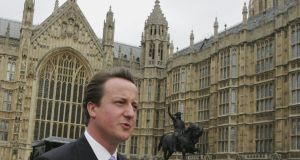 Controversial new powers to cancel the passports of UK nationals who travel abroad to fight with Islamic State (Isis) are to be included in a Counter-Terrorism Bill to be tabled in Parliament this month, British prime minister David Cameron has said.

Mr Cameron said the enhanced security measures - which will also allow border guards and airport police to seize the travel documents of suspected jihadis - were needed to counter the “existential threat” posed to Britain by extremists.

Civil liberties campaigners accused the government of “dumping suspect citizens like toxic waste”, and ministers are braced for a series of legal challenges over what critics say would be a breach of an international ban on making people stateless.

But legal experts - including former attorney general Dominic Grieve, who dismissed earlier plans as a “non-starter” - suggested the terms of the new restrictions were sufficiently tightly drawn to comply with international law.

The proposals were applauded by the chair of the Commons Home Affairs Committee, Labour MP Keith Vaz, as “tough, decisive measures which send out a powerful message”.

Shadow home secretary Yvette Cooper said the opposition would examine the proposals but warned that more needed to be done to tighten border controls and reinstate scrapped community anti-radicalisation programmes.

The legislation, unveiled by Mr Cameron in a speech to the Australian parliament, will block individuals returning to the UK from Syria and Iraq for at least two years unless they comply with strict measures.

These measures could include being escorted back to Britain and then facing prosecution, bail-style reporting conditions, deradicalisation courses or being subjected to Terrorism Prevention and Investigation Measure orders (TPIMS).

Any attempt to sneak back into the UK after passport cancellation would be punishable by up to five years in prison.

Airlines will be ordered to comply with a “no-fly list” of individuals barred from travel to the UK because of suspected involvement in terrorist activities, and to use interactive electronic data systems capable of receiving instructions to offload or to screen any passenger.

Any airlines which bring banned individuals into the country could face civil penalties, including the removal of the right to land in the UK.

Downing Street hopes the measures could be in place by January after reaching agreement with the Liberal Democrats.

At a press conference with Australian PM Tony Abbott following his speech, Mr Cameron said: “Successive governments have come to the view - and I agree with that view- that when you are facing an existential challenge and a challenge as great as the one we face with these Islamist extremists, we need additional powers as well as the criminal law.”

The move was strongly criticised by rights group Liberty, who said it would be counterproductive.

Director Shami Chakrabarti said, “Abdicating your responsibilities to the international community is a very strange way of promoting the rule of law.

“Summary powers to ‘stop and seize’ passports at airports will prove just as divisive and counter-productive as the infamous ‘stop and search’ powers that preceded them.

“When will our governments learn that there are no short cuts to our security? It needs to be built on intelligence, evidence and justice, not speeches, sound bites and ever more new laws.”

Mr Cameron said he had considered the implications for civil liberties and for other states but decided the change was “necessary to keep the British public safe”.