Weather due to improve over coming days, forecasters predict 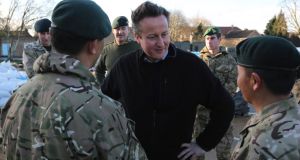 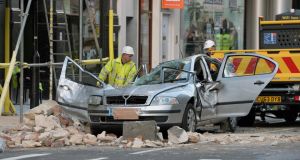 Workmen clear debris at the scene in Kingsway, opposite Holborn Tube station in central London, after Julie Sillitoe (49), was killed when large chunks of masonry fell from the building above the Hiba restaurant on to her taxi on Friday night. Photograph: Anthony Devlin/PA Wire

The military could have been brought in earlier to help deal with the winter storms that have been wracking Britain, a Government minister has admitted.

As the weather finally gave the country a respite, defence secretary Philip Hammond defended the government’s handling of the crisis. He said Royal Engineers were now being tasked to carry out a high-speed assessment of “serious” to damage the UK’s flood defence infrastructure.

But Mr Hammond conceded that in future the Government would involve the military earlier in the process, and be more “aggressive” in urging local authorities to use troops. Swathes of the UK remain on high alert as people battle to protect their homes and communities from the floodwaters, which are still expected to rise in places despite the break in the storms.

Two people died on Friday - James Swinstead, an elderly passenger on a cruise ship in the English Channel, and minicab driver Julie Sillitoe (49), whose car was hit by falling masonry in central London.

A 20-year-old pregnant woman and her unborn baby, from Tredegar, South Wales, also died in a crash on the A465 between Brynmawr and Garnlydan. A firefighter died of an apparent heart attack while on duty in a flood-hit area last night, but it is unclear whether there was any link to the storms.

Mr Hammond said more than 3,000 troops were currently deployed to help and 5,000 more were available if needed. “We’ve agreed with the Environment Agency that we will use Royal Engineers to do a very rapid inspection of all the nation’s flood defences,” he told the BBC’s Andrew Marr Show. “So we’re going to try and do in five weeks what would be about a two-year programme of inspection, just to assess the level of damage...

“This series of weather events over the past two months has caused some quite serious damage to our flood defences.” Mr Hammond said the government had been delivering a “proper response” to the crisis, but said in future it was likely to use troops earlier.

“We’re dealing with an extraordinary set of weather events. It’s taken some time to mobilise the resources that are necessary to respond,” he said. “We offered troops quite a long while ago to civil authorities who wanted them. What we’ve done over the last 10 days is push them a bit more aggressively at those civil authorities.

“Putting military liaison officers into the gold commands so that they are embedded in the system has been a major step forward and I think probably we will want to make sure in future that we do that at a very early stage in any emerging problem. Mr Hammond indicated that ministers were planning to spend more on