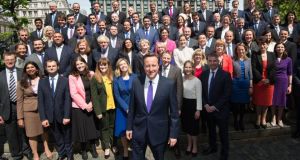 David Cameron has concluded a “steady-as-she-goes” post-election reshuffle, which saw the most senior jobs remain in the same hands as the prime minister created his first Conservative-only cabinet.

Among the appointees was Boris Johnson, who will be a member of Mr Cameron’s political cabinet but not a minister, the prime minister confirmed as he appointed the rest of his government.

Mr Johnson had not been expected to take a big spending department while serving out his final term as London mayor, and Mr Cameron said that Mr Johnson would “devote his attention” to his mayoral duties over his remaining year at City Hall.

Other cabinet appointees announced on the first working day of the new Conservative government included Sajid Javid as business secretary, in a promotion from culture, media and sport, replacing Vince Cable in one of a number of posts left empty by the end of the coalition with the Liberal Democrats.

Former Commons culture committee chairman John Whittingdale replaces Mr Javid as culture secretary, with next year’s 10-yearly renegotiation of the BBC’s Royal Charter at the top of his in-tray.

Mr Whittingdale last year described the BBC licence fee as “worse than a poll tax” and said it was “unsustainable” in the long run and needed tweaking immediately.

Hastings and Rye MP Amber Rudd is one of a number of women being promoted by Mr Cameron, moving upwards within the department for energy and climate change, from a junior ministerial position to the cabinet-level secretary of state role vacated by Liberal Democrat Ed Davey, who lost his seat last week.

Ms Rudd is one of a number of additional women attending cabinet, though only she and new leader of the Lords Baroness Stowell took on full membership status.

Iain Duncan Smith is to remain in charge of the UK government’s controversial welfare reforms as work and pensions secretary.

They were joined today by Jeremy Hunt, who remains health secretary, Patrick McLoughlin, who remains at transport, Liz Truss, who remains at environment, Theresa Villiers, at Northern Ireland and Stephen Crabb, at the Wales office.

Michael Gove is returning to the top of government - moving from chief whip to lord chancellor and justice secretary at the expense of Chris Grayling, who becomes leader of the House of Commons.

The Conservatives’ only surviving MP north of the border, David Mundell, became Scotland secretary, filling another post formerly held by the Liberal Democrats.

Oliver Letwin has been promoted to a full member of cabinet and will be in overall charge of the cabinet office as chancellor of the Duchy of Lancaster.

Chelsea and Fulham MP Greg Hands was appointed to Liberal Democrat Danny Alexander’s former job of chief secretary to the treasury - effectively deputy to the chancellor of the exchequer - but the role was downgraded, as he will attend cabinet but not have full cabinet membership.

Mark Harper, who quit as immigration minister over the work status of his cleaner, takes over from Mr Gove as chief whip.

Robert Halfon, who was the chancellor’s parliamentary private secretary (PPS) in the last parliament, has been appointed deputy chairman of the Conservative Party.

Grant Shapps has been moved from the post of Tory party chairman to international development minister.

Eric Pickles lost his job of communities and local government secretary to former universities minister Greg Clark, amid reports that he is to join Mr Cameron’s Holocaust Commission, as well as becoming anti-corruption tsar.

Anna Soubry has been moved sideways from minister of state for defence to minister of state in the department for business, innovation and skills, where she will have responsibility for small business. She will attend cabinet.

Priti Patel will replace Esther McVey, who lost her seat, as employment minister. She will attend cabinet but will hold the rank of minister of state.

The political cabinet includes all the key figures at the top of the government, but excludes civil servants as matters discussed are party political. No minutes are taken at the meetings, expected to take place fortnightly at 10 Downing Street following the weekly meeting of the full cabinet, which formally agrees policy and sits at the heart of government.

A spokesman for Boris Johnson, who is also newly-elected MP for Uxbridge and South Ruislip - said in response to today’s announcement: “This is not a ministerial appointment. He won’t be attending full cabinet and won’t be running any department.

“The mayor has always been clear, he has to fulfil his mandate running London first, and that’s exactly what he will be doing until his term ends in May 2016.”

Mr Javid’s appointment was welcomed by business, with CBI director general John Cridland describing him as “a strong voice for the business community”.

John Longworth, director general of the British Chambers of Commerce, said Mr Javid’s priorities should be “kick-starting a revolution in exports, and working with us to ensure that firms can get new recruits with the skills and motivation to get ahead in the world of work”.

The BBC said it was “looking forward” to working with Mr Whittingdale.

Under bright sunshine in the UK parliament’s New Palace Yard, Mr Cameron posed with the scores of MPs elected as Tories for the first time at last week’s general election.

He arrived flanked by the highest profile victors - Tania Mathias, who took Twickenham from Vince Cable, Craig Tracey, who held the Tories’ most vulnerable seat in Warwickshire North, and Derek Thomas, who won St Ives from Liberal Democrat Andrew George.

Also alongside the prime minister were Andrea Jenkyns, who toppled Ed Balls in Morley and Outwood, and Kelly Tolhurst, who beat Mark Reckless at the second attempt in Rochester and Strood.