UK bombings on Isis could begin on Thursday after Commons vote 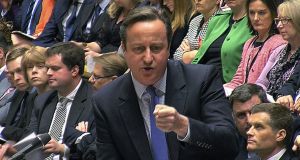 A motion in favour of air strikes was supported by 397 votes to 223, a margin of 174 MPs. An earlier motion seeking to block the action was also defeated.

The vote followed a debate lasting more than 10 hours that was frequently passionate and at times bitter, with divisions within the two main parties as sharp as those between them. The debate began on a sour note, with the prime minister repeatedly refusing to apologise for characterising opponents of air strikes on the Labour benches as “terrorist sympathisers”. It soon became evident, however, that most MPs shared Mr Cameron’s view that attacking Isis in Syria was in Britain’s national security interest.

Mr Cameron called on MPs to “answer the call from our allies” by extending Britain’s military campaign against Isis into Syria, asserting that the group was “plotting to kill us and to radicalise our children right now”.

Labour leader Jeremy Corbyn said there was no doubt that Isis had imposed a reign of sectarian and inhuman terror in parts of Iraq, Syria and Libya but he claimed that the prime minister had failed to outline a credible military or political justification for air strikes. The rift within Labour over Syria was most eloquently expressed in the fact that, while the Labour leader opened his party’s contribution to the debate with a call to oppose the motion, shadow foreign secretary Hilary Benn closed it with a speech in support of it.

Mr Benn, the son of the late left-wing Labour MP Tony Benn, located his support for air strikes within Labour’s internationalist tradition, describing Isis as fascists who must be confronted.

“What we know about fascists is that they need to be defeated and it is why, as we have heard tonight, socialists and trade unionists were just one part of the international brigade in the 1930s to fight against Franco. It’s why this entire House stood up against Hitler and Mussolini. It’s why our party has always stood up against the denial of human rights and for justice and my view, Mr Speaker, is that we must now confront this evil,” he said.

As Mr Benn sat down to extended cheers and applause from both sides of the House, the Labour leader sat stony-faced next to him.

“We are already flying reconnaissance missions over Syria. Our planes are carrying weapons over Syria into Iraq, so it would be a relatively simple exercise to extend the permissions to allow them to release those weapons over Syria where they identify legitimate targets,” he said.

Conservative backbencher Andrew Tyrie warned, however, that military intervention in Syria without a more considered political strategy was likely to be no more successful than other recent western interventions in the Middle East.

“The result of over a decade of intervention in the middle east has been not the creation of a regional order more attuned to western values and interests, but the destruction of an existing order of dictatorships that, however odious, was at least effective in suppressing the sectarian conflicts and resulting terrorism that have taken root in the middle east. Regime change in Iraq brought anarchy and terrible suffering. It has also made us less safe,” he said.