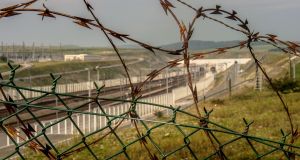 Two more suspected illegal immigrants have been arrested after walking through the Channel Tunnel to reach Britain.

The latest security breach in the tunnel came after a large-scale incursion of more than 100 migrants on the French side at the weekend.

Chunnel operator Eurotunnel was forced to close the tunnel early on Saturday morning after a “large and coordinated” group stormed the track at Calais.

The two Iranians reached Folkestone, Kent, apparently after walking through the tunnel.

Kent police said Payam Moradi Mirahessari (25) and Farein Vahdani (20) have been charged after being detained on Saturday afternoon.

They are accused of obstructing an engine or carriage using the railway, and were remanded in custody when they appeared at Medway Magistrates’ Court.

In August, a 40-year-old from Sudan completed the same journey by walking through the tunnel.

Hundreds of security cameras and officers are based at the Calais entrance to the tunnel, where trains travel at up to 100k/h.

Eurotunnel officials have said that increasingly desperate measures are being used by migrants to try to reach Britain.

Thirteen have died attempting to cross the Channel since the start of the latest crisis in June.

The most recent was an Eritrean man in his 20s who was hit by a freight train last week.

About 5,000 migrants displaced from countries including Syria, Libya and Eritrea are believed to be camped in and around Calais.

The surge in migrants attempting to cross the Channel prompted a string of measures to increase security at the terminal, including extra fencing and the deployment of more border force search and dog teams.

At its peak, the number of attempts to board lorries or trains was about 2,000 a night, but that has since fallen.

It came after pressure to admit more people from the war-ravaged country following the publication of photographs of three-year-old Aylan Kurdi, who drowned with his mother and brother while trying to cross from Turkey to Greece by boat.