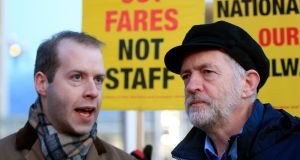 British Labour Party leader Jeremy Corbyn (right) with shadow rail minister Jonathan Reynolds at King’s Cross, London, on Monday. Mr Reynolds said he was resigning because he could not “in good conscience endorse the world view of the Stop the War Coalition”. Photograph: Jonathan Brady/PA Wire

Jonathan Reynolds said he was resigning as shadow rail minister because he could not “in good conscience endorse the world view of the Stop the War Coalition” – a group closely linked to Mr Corbyn.

Stephen Doughty, shadow foreign affairs minister, quit live on television, telling the BBC’s Daily Politics programme that he had “looked at his own conscience” and was stepping down after the leader’s office told “lies” about the reasons why Europe spokesman Pat McFadden had been dismissed.

Then Kevan Jones annouced he was standing down as shadow defence minister, saying he disagreed with Mr Corbyn on scrapping Trident, Britain’s nuclear submarine programme.

Earlier Mr Corbyn sacked Mr McFadden for disloyalty and moved his pro-nuclear defence spokeswoman to another job in an attempt to tighten control over his rebellious parliamentary party.

Members of Mr Corbyn’s shadow cabinet had openly disagreed with him over foreign and defence policy – hobbling the party’s ability to challenge the Conservative government.

Ms Eagle was in favour of renewing Trident, putting her at odds with Mr Corbyn, who has argued that the more than £100 billion (€137 billion) cost to replace the country’s deterrent could be better used. Ms Thornberry has voted against renewing Trident.

He will be replaced by Pat Glass, a pro-Europe former junior education spokeswoman.

Another member of the shadow cabinet, culture spokesman Michael Dugher, was earlier sacked.

“He came to the view that with both Michael and with Pat he didn’t feel he had confidence in them,” he told Sky News.

“There were issues where there has been undermining of his leadership and not accepting his mandate from the party members that he received in the election.”

McDonnell said Mr Corbyn was trying to “hold everyone together but be very clear about our direction of travel in terms of policy”.

But Mr Reynolds, the rail spokesman, said in his resignation letter posted on his Facebook: “I understand your need for a greater degree of discipline on the front bench and therefore believe it would be more appropriate to advocate these causes as a backbencher.”

In what was seen as a compromise with Labour’s more moderate members, however, the party’s shadow foreign minister Hilary Benn, who had been tipped to be ousted after openly opposing Mr Corbyn last year over military action in Syria, kept his job.

Mr McDonnell said, however, that Mr Benn would now have to keep step with Mr Corbyn’s views.

“Hilary Benn has ensured that he works more closely with Jeremy in the future and that he will be representing the views of the Labour Party,” he said.