Profile: Britain’s incoming PM is a formidable negotiator with no time for impropriety 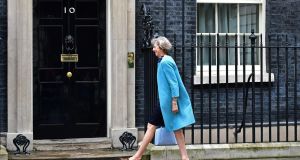 British home secretary Theresa May approaching No 10 Downing Street days after the Brexit referendum last month. Now she seems most likely to be taking up residence there as Conservative prime minister. File photograph: Leon Neal/AFP/Getty Images 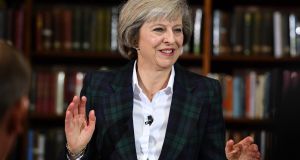 For a woman who is on the verge of running the country, Theresa May seems almost preternaturally calm.

“She’s basically the same as ever; quite relaxed and cheerful. There’s no sense of the prison shades falling,” says a longstanding friend. But then, she knows better than almost anyone what’s coming.

Over the past six years, May has weathered riots, sat in on a decision to go to war, and chaired an emergency Cobra meeting in the prime minister’s absence following the murder of soldier Lee Rigby.

She has been diligently doing her homework for years and, although even she did not foresee David Cameron resigning in these circumstances (or Andrea Leadsom’s sudden withdrawal from the race to replace him), she is as ready as she will ever be.

The home secretary owes her victory to her clear win in the ballot of MPs - in the final round May secured the support of 199 colleagues, 60 per cent of the 330 who sit on the Conservative benches in the Commons. Leadsom, with less than half on 84, clearly felt she could not compete.

Tory grandee Ken Clarke’s unguarded remarks about her being a “bloody difficult woman”, taped during a supposedly off-air conversation in a TV studio, almost certainly did her nothing but good.

The grassroots party may not have had a chance to vote on the leadership, but it is stuffed with formidable Tory women d’un certain âge - all too used to being patronised and dismissed as “difficult” by men of Clarke’s generation.

Patronising or not, May’s friends concede Clarke has a point. “She can be a bugger,” says one otherwise admiring colleague succinctly. “Not easy to work with.”

May fights her corner tigerishly and, unusually for a politician, does not seem to care much about being liked.

Indeed, the most intriguing political comparison is arguably not with Thatcher - but with Gordon Brown. Two serious-minded children of religious ministers, steeped in moral purpose, both possessed of an iron need to control.

May is a famously reluctant delegator, needing to know exactly what her juniors are doing and to chew over every detail of decisions - a micro-management style she cannot hope to apply to an entire government - and like Brown, she demands unswerving loyalty. (Although unlike him, she generally won’t say behind your back what she wouldn’t say to your face).

Yet for all her apparent stubbornness, in private May is surprisingly open to a well-sourced argument. Pickles describes her as “the one person I’ve worked with that you could spark ideas off, bounce things around”.

A former junior minister who observed her playing hardball in negotiations says she will usually do a deal in the end: “It’s not just ‘because I say so’ - if you make a good argument to Theresa, she can be willing to change her position.”

She may not be adored but she commands admiration, a wary respect, and deep gratitude from many Tory women for what the business minister Anna Soubry calls the “proper sisterhood” she has built inside the party. There is something fitting about the fact that over a decade after May overhauled the candidate selection system to bring more women and minority ethnic MPs up the ladder behind her, her party briefly volunteered an all-female shortlist for the top job.

What makes a May premiership interestingly unpredictable is that she has always been driven less by ideology than by morality, a very personal sense of right or wrong.

She loathes any sense of impropriety in public service, of sloppy and self-serving behaviour leading to injustice. As prime minister, could she extend that sense of moral duty to economic as well as social issues?

Over coming weeks May is expected to pitch herself to the nation not merely as a strong leader in a crisis but as a champion of the “left-behind”, people who are struggling financially and voted to leave the EU because they didn’t see how things could get much worse.

Robert Halfon, the minister without portfolio and champion of blue-collar conservatism, recognises that description well from his Harlow constituency. He backed May partly because he hopes she will advocate a more socially responsible capitalism.

“I don’t think she’s a slasher and burner. I think she’ll take on crony capitalism - I’ve said we should be a party of the NHS not BHS, not these awful people screwing the workers,” he says. “I think people want the security she embodies.”

Even ardent Brexiters in his constituency association now favour her, he says, because “they see her as a worker, a grafter”.

It’s not hard to see where she got her strong sense of duty from. The only daughter of the Rev Hubert Brasier and his wife Zaidee grew up in rural Oxfordshire, in a family that revolved around the demands of her father’s parishioners.

It was dinned into her very young that as the vicar’s daughter, she was always “on show” - and to this day she retains a puritanical streak; the juiciest surprise in her published tax return is that she gives quite heavily to charity.

Hers was a comfortable middle-class upbringing - two years of private school, then a local grammar and Oxford - and she enjoys a famously strong marriage to Philip, a banker she met at a Tory student disco.

But life hasn’t always been easy. Her father was killed in a car crash shortly after she graduated, and her mother, who had multiple sclerosis, died the year after. Then came the bitter discovery that the Mays could not have children.

She watched as one by one her male Oxford contemporaries bagged seats before her and, despite being promoted dizzyingly fast when she finally reached Westminster in 1997, has never quite felt part of any leader’s inner circle.

But perhaps it took a certain sense of detachment to deliver that broadside after the 2001 defeat, in which she warned that the Conservatives would not regain power while they were seen as a “nasty party”.

It remains a pivotal moment in Tory history, presaging Cameron’s modernising revolution four years later. Surviving the ferocious subsequent backlash, meanwhile, taught her that she was tougher than she thought.

Such feats of daring remain, however, rare. “She likes to go through the usual structures,” says a fellow senior minister, who praises her as “careful” rather than wildly creative.

She is in many ways the continuity candidate, with Tories speculating that trusted colleagues such as the foreign secretary, Philip Hammond, might well stay in their old jobs to smooth the transition further.

Even the chancellor, George Osborne, has gone out of his way to be helpful, holding private talks with her in recent days.

Yet in a time of national crisis, consistency and carefulness probably sounds appealing to Conservatives. Halfon says that when he asked constituents for their views on a new leader, the word he kept hearing was “security”. She may lack a grand political vision, but if the sky fell in, you sense she’d know what to do.

Yet awkward questions remain. If she is such a strong leader, where on earth was she during the EU referendum? Surely not cynically hedging her bets for a leadership campaign? Meanwhile, the issue already dominating the post-Brexit agenda, immigration, is one that has the potential to split her supporters.

As home secretary, she has been both passionately liberal on race issues - challenging stop-and-search because it routinely discriminates against young black men, for example - and hardline on immigration, regularly suggesting measures draconian enough to be overruled by cabinet colleagues.

She has ridden both horses deftly enough so far. But many MPs do wonder whether deep down she can really believe as strongly in them both; whether she’s either a closet liberal, struggling manfully with an immigration policy she wouldn’t have chosen, or simply less principled than everyone thinks.

Eyebrows shot up when she used her last party conference speech to declare baldly that there was “no case in the national interest” for immigration at its current levels, and that the consequences for schools and housing could not easily be managed away. (Downing Street apparently watered down an even tougher draft).

This week’s refusal to guarantee EU nationals’ right to stay here post-Brexit - although her camp says she is simply awaiting a matching guarantee for Brits abroad - reopens niggling doubts for some.

“I’ve struggled with this, frankly,” says one modernising MP who backed her only after some soul-searching. “Her views on stop-and-search, on same-sex marriage, and forced slavery - it just doesn’t square with this.”

But Pickles, who told Johnson to his face recently that he had been “negligent in terms of what the Brexit campaign was doing to community relations”, argues however that May was simply ahead of the curve.

“She’s understood in a way that I don’t think I did what a big deal it was, immigration. I’ve always been of the view that if you let the genie out of the bottle it’s very difficult, but I think she got the early warning signs,” he says. “I think (that speech) was a genuine attempt to try and pull us back before the great chasm we descended into.”

Whatever the truth, the Conservatives are in that chasm now. It may fall to Theresa May to drag them out.