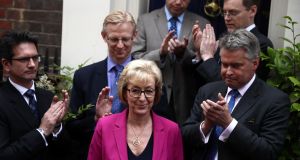 Andrea Leadsom MP speaks to the media as she announces her withdrawal from the Conservative leadership race yesterdat. Photograph: Carl Court/Getty Images

When Theresa May woke up yesterday morning, she was preparing to make a policy speech at the start of what was shaping up to be a long, hard- fought leadership contest. By the afternoon, she was prime minister-in-waiting, preparing to move into 10 Downing Street tomorrow evening.

May’s elevation followed the latest, unexpected plot twist in an extraordinary two weeks at Westminster that has left a heap of political corpses in its wake.

David Cameron, who had a few months before boasted to EU leaders that he is “a winner”, leaves office as a failure with his country in turmoil. Boris Johnson, only two weeks ago the front-runner to succeed him, is now a half-forgotten piece of political roadkill in the rear-view mirror of the fast- moving caravan of events.

Andrea Leadsom’s withdrawal from the leadership contest came after a bruising weekend of hostile press coverage, which was entirely of her own making.

Her interview with the Times on Saturday, suggesting that having children gave her an edge over May, was ill-advised. But it was her disastrous handling of the controversy which revealed how much Leadsom lacked the experience and the judgment necessary for the office she sought.

Leadsom at first claimed she was quoted out of context, a defence that was soon abandoned when the Times released a transcript and a recording of the interview. The controversy followed questions about claims she had made about her experience in business, which exaggerated her role in fund management.

The energy minister claimed yesterday that she was withdrawing from the race because she only had the support of 25 per cent of Conservative MPs. But that was also true last week, when she was gung-ho about her prospects of winning over the membership against May.

Leadsom’s withdrawal is good news for the Conservative Party, which will avoid a contest that would have deepened some of the divisions within the party exposed during the EU referendum.

During the course of an eight-week campaign, both candidates would have likely adopted rigid positions on Britain’s withdrawal negotiations from the EU.

May will now succeed Cameron as prime minister on tomorrow, cutting short a lame-duck premiership that has contributed to the uncertainty surrounding policy in post-Brexit Britain. Its neighbours will soon know the make-up of the government that will lead the exit negotiations. And in May, Britain will have a prime minister with a firm grasp of policy detail, with a reputation for competence in Whitehall.

May has no coterie at Westminster, so she has few friends she needs to reward with cabinet posts. She is likely to include some prominent campaigners for Brexit, among them some of her vanquished rivals for the leadership. But the scale and swiftness of her victory means there is a limit to the magnanimity she will be required to show.

George Osborne, with whom May has always enjoyed a frosty relationship, was in any case expected to move from the treasury, but he may be disappointed in his ambition to become foreign secretary.

Unlike Leadsom, who wanted to invoke article 50 of the Lisbon Treaty immediately, May has said she would prefer to wait until next year to start formal exit negotiations. Although she backed the Remain side in the referendum, she has promised to implement the referendum outcome, insisting again yesterday that there would be no “back door” reversal of the decision to leave the EU.

Still, by bypassing an election contest, May has avoided being pushed into making commitments that would restrict her negotiating mandate with the EU. She must now work out how to reconcile Britain’s interest in maintaining maximum access to the European single market with the political imperative of ending or restricting the free movement of people.

Cameron has, in recent days, suggested that Britain’s interest lies in maintaining the closest possible relationship with the EU after Brexit. That points to an arrangement similar to Norway’s, which is part of the European Economic Area (EEA) and consequently of the single market.

However, there is no appetite in EU capitals for offering Britain the equivalent of EEA membership, providing full access to the single market with no obligation to accept free movement of people.

There will be some bitterness among supporters of May’s rivals about her accession to 10 Downing Street through a coronation rather than an election. But with the backing of 60 per cent of Conservative MPs in the final parliamentary ballot last week, she is well placed to stamp her authority on the party.

Besides, May’s opponents have only themselves to blame for placing their hopes in such an obviously flawed candidate as Leadsom.