Suspect in killing of soldier Lee Rigby appears in court 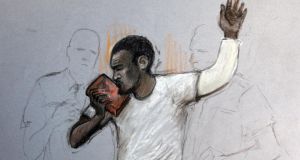 A court sketch of Michael Adebolajo kissing the Koran during his appearance at Westminster Magistrates’ Court in London today. Photograph: Elizabeth Cook/PA Wire

A man charged with murdering British soldier Lee Rigby last month on a busy London street appeared in court for the first time today, clutching what appeared to be a Koran in his right hand.

Michael Adebolajo (28), was formally charged with the murder of drummer Lee Rigby and remanded in custody until a hearing at the Old Bailey Central Criminal Court on June 28th.

The British-born son of Nigerian parents was also charged with the attempted murder of two police officers and faced a further charge of possession of a firearm with intent.

Mr Adebolajo was shot by police along with another man at the scene of the killing in the southeast London neighbourhood of Woolwich on May 22nd.

The second suspect, Michael Adebowale (22), was remanded in custody to the same date when he appeared by video-link at the Old Bailey for a bail hearing after being remanded by Westminster magistrates last Thursday.

Mr Adebolajo, in his first public appearance since the killing, gave a thumbs-up sign to his defence lawyer and blew kisses to a man in the public gallery, mouthing the words “I love you”. The man declined to comment after the hearing.

Mr Adebolajo had his left arm in plaster and asked to remain seated during the five-minute hearing.

Flanked by three security guards behind glass panels in the dock, Mr Adebolajo interrupted the hearing repeatedly, asking why he had to stand up and questioning the charges after they were read to him.

“Forgive my speech. I would like to alleviate the pain if I may,” he said at the end of the short hearing. He then stretched out his arms, held a pose for a few seconds and kissed the book he was holding.

He was led out of the dock, waving to the public gallery and smiling.