Sturgeon accuses May of ignoring Scotland in Brexit talks 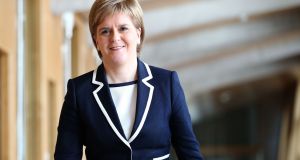 UK and Scottish leaders have clashed over the role of the Edinburgh parliament in the upcoming Brexit negotiations, raising the possibility of a Scottish legal challenge to Britain’s exit from the European Union.

Scotland’s first minister Nicola Sturgeon accused her UK counterpart Theresa May of overlooking Scotland after the prime minister said that only the Westminster government would have a say on Brexit.

Speaking at the Conservative party conference last weekend, Ms May said that Scotland would leave the EU along with the rest of the United Kingdom. There will be “no opt-out from Brexit”, the Tory leader said.

Confirmation that the devolved parliament at Holyrood in Edinburgh will have no veto over the terms of Brexit prompted anger from Scottish nationalists. Some senior Scottish National Party figures have suggested that Holyrood could block the so-called “Great Repeal Bill”, the legislation that will remove the European Communities Act 1972 from statute books, starting the UK’s exit from the EU.

Scots overwhelmingly backed staying in the EU in June. In the immediate aftermath of that vote, Ms Sturgeon warned that a second Scottish independence referendum was “highly likely”.

On Sunday, Ms Sturgeon accused Ms May of “going out of her way to say that Scotland’s voice and interests don’t matter”.

“Strange approach for someone who wants to keep [the] UK together,” the Scottish first minister said on Twitter.

Mike Russell, Scotland’s Brexit minister, said Scotland was being pushed into a “hard Brexit” against its wishes and warned the Scottish Parliament might try to prevent Ms May’s repeal bill.

Lawyers for the British government have maintained that the parliaments in Edinburgh, Belfast and Wales will not be able to stop Brexit.

Convention in British politics dictates that Westminster “will not normally legislate” in issues that are devolved to Scotland, Wales or Northern Ireland without their consent. This could leave the possibility for an argument that the repeal bill would have to receive the consent of the Scottish parliament, said Rory O’Connell, director of the Transitional Justice Institute at the University of Ulster.

“Conventions are often unclear, as there is no formal written constitution in the UK, so it is always open to interpretation as to what they mean,” said Prof O’Connell. “In addition, conventions cannot be enforced in the courts – any enforcement is political.”

“So there is an argument that the consent of the Scottish parliament, and for that matter the Northern Ireland Assembly, would be required for such a bill. Because the requirement of consent is a convention, the Westminster parliament could overrule any opposition from the devolved assemblies.”

“What happens in that context is not so much a legal as a political question: how would the Scottish parliament and government react to such a decision by the London authorities?” he said.

Last month, Ms Sturgeon began a consultation on Scottish independence. Although polls show a majority in favour of the union, her predecessor Alex Salmond has predicted that a second vote could be held in 2018.

Writing in The Irish Times yesterday, Mr Salmond said he had “no doubt” that Ms Sturgeon “will soon propose an initiative which discharges her mandate to protect Scotland’s position as a European nation”.

Scottish Conservative leader Ruth Davidson said that nationalists could not “wish away” the result.