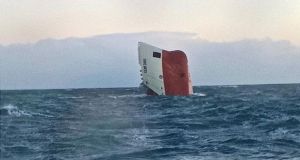 The Cemfjord cargo ship after it overturned off the north coast of Scotland. Photograph: RNLI Wick/PA

Severe weather is likely to have played a part in the capsize and sinking of a cargo ship off northern Scotland with eight crew on board, the vessel’s management company has said.

A major search effort was first mounted on Saturday after the upturned hull of the Cypriot-registered Cemfjord was spotted in the waters of the Pentland Firth by a passing ferry.

The search was suspended just after 4pm on Sunday after no trace was found of the eight crew members.

There are no plans to resume the search on Monday.

The Marine Accident Investigation Branch (MAIB) is investigating the incident.

Tony Redding, spokesman for German shipping company Brise of Hamburg, which manages the ship, said it will take time to piece together what happened.

He said: “It was a violent storm and it seems likely that the weather would have been a factor but, until we have some better idea of what happened, I can’t say how much of a factor.

“It must have played some part in what happened but it will take some time to put the picture together because, sadly, we’re not in a position to interview the crew and the vessel is submerged in around 68 metres of water.”

He added: “We look for abnormalities and at the moment we don’t have any apart from the fact that there was severe weather at the time.”

The company last heard from the vessel at lunchtime on Friday and there was no distress call.

The crew on the NorthLink ferry Hrossey alerted the Coastguard after spotting its upturned hull around 16km east of the Pentland Skerries, about 24km from Wick at around 2.30pm on Saturday.

On Monday morning the Northern Lighthouse Board vessel Pharos is due on the scene to do a sonar search of the seabed where the vessel sank, and assess how it is lying.

Mr Redding said: “The first step is to pinpoint its exact position and how it’s lying in relation to the seabed.

“We will be talking to technical experts and beginning the process of moving forward and considering where we go from here. The last few days have been filled with the search and rescue operation.”

The Coastguard will continue to broadcast messages to all shipping requesting that they are informed about any information or sightings that could be related to the vessel.

The families of the missing crew, made up of seven Poles and one Filipino, have been notified.

The 83m bulk cement carrier had been bound for Runcorn, Cheshire, on the west coast of the UK.

It has emerged that the Cemfjord was involved in an incident last July when it was grounded off Denmark.

The Russian captain was found to have excessive levels of alcohol in his blood and was dismissed.

The company said that no-one was injured and there was no pollution.