Semen quality can be lowered by up to 50% with high consumption, Harvard research finds 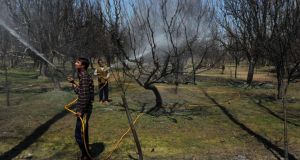 High pesticide residues in some fruits and vegetables can reduce the quality of men’s semen by up to half, according to a major United States survey published on Monday.

The five-year study, the first of its type, has significant implications for public health, according to medical journal Human Reproduction, which says attention is more often focused on women’s difficulties in giving birth.

Fruit and vegetables eaten by the men who took part in the Harvard University study were rated as being high, moderate or low for residues, based on US department of agriculture figures. Among those in the “high” category were peppers, spinach, strawberries, apples and pears, while those rated low included peas, beans, grapefruit and onions. The tests took account of whether they were peeled and washed.

“These findings should not discourage the consumption of fruit and vegetables, in general,” said Jorge Chavarro of the Harvard TH Chan School of Public Health in Boston.

Semen quality is not linked to the quantity of produce consumed, but the quality, he said, adding that organically grown produce or avoiding produce known to have large amounts of residues “may be the way to go”. Indeed, men who consumed the highest quantities of fruit and vegetables known to have the lowest levels of pesticides had the highest rate of “normally shaped” sperm.

Past research has shown that exposure to pesticides at work could have an effect on semen quality but, up to now, there has been little investigation of the effects of pesticides in diet.

Human Reproduction is one of the top three journals in the world in the field of reproductive biology, obstetrics and gynaecology. The US imposes pesticides limits, though critics argue the low number of tests gives importers little incentive to comply. The EU has harmonised rules since 2008.

1 Gardaí investigating four-lane motorway sulky race
2 A Russian cruiser with ‘cannibal rats’: What other ‘ghost ships’ could be out there?
3 Grave concern in North over London’s new immigration rules
4 DUP pleads with UK to reduce salary threshold for migrant workers coming to North
5 Dublin schoolboy (14) appears in court charged with rape
Real news has value SUBSCRIBE