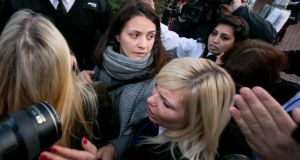 Elisabetta Grillo (centre) and Francesca Grillo (head down, to right) leave Isleworth Crown Court today. The Italian sisters, who worked as assistants to Nigella Lawson and Charles Saatchi, were mobbed by media as they left the court after being found not guilty of defrauding their former employers. Photograph: Dan Dennison/Getty Images

Two former personal assistants to Charles Saatchi and his ex-wife Nigella Lawson have been cleared of fraud.

The jury at Isleworth Crown Court, west London, found Italian sisters Elisabetta and Francesca Grillo not guilty of a single count of fraud each.

It was alleged that between January 1st, 2008, and December 31st, 2012, the women committed fraud by abusing their positions as PAs, using a company credit card for personal gain — and were accused of spending more than £685,000 sterling on themselves.

Elisabetta (41) sometimes referred to in court as Lisa, and Francesca (35) both of Kensington Gardens Square, Bayswater, west London, had been accused of living the “high life”.

The court heard they used credit cards loaned to them by the TV cook and her ex-husband Mr Saatchi to buy designer goods from Louis Vuitton, Christian Dior and Vivienne Westwood.

Francesca was accused of spending the largest amount on herself — a sum of £580,000. But the sisters insisted all of their purchases had been authorised.

And in a sensational twist their defence lawyers introduced allegations of drug-taking by Ms Lawson and marital strife involving the celebrity couple.

It was claimed by the defence that there was a culture of secrecy within the high-profile couple’s marriage and that the Grillo sisters were aware of Ms Lawson’s alleged drug use, while Mr Saatchi was not.

The defence claimed that Elisabetta’s knowledge of Ms Lawson’s supposed drug use materially affected the TV cook’s attitude towards her spending.

After the three-week trial, the jury of seven men and five women rejected the prosecution’s claims that the purchases on the cards had been unauthorised.

Earlier, the jury was told that neither sister was in the dock as one remained unwell and was “very anxious”.

Judge Robin Johnson told the jury this morning: “You will notice that neither defendant is in the dock. They are in the building.

“One of them is not feeling well, is very anxious and you will appreciate that a criminal trial is a stressful business for many people, no more stressful than for the person on trial, in this case, herself.

“I have said that the defendants can be in another room while court proceedings proceed, with the consent of the barristers.”

He stressed that it had no bearing on the jury’s deliberations and added: “It’s not as if they have not turned up today.”

The jury of seven men and five women were sent out yesterday morning after a three-week trial.

1 Could Ireland put towns under lockdown if coronavirus arrived?
2 Varadkar declines to negotiate with Fianna Fáil on forming government
3 Dublin man may have been stabbed to death by woman in parking space row
4 IRFU seek meeting over call to postpone Ireland-Italy match
5 Coalition of Civil War parties would not benefit ordinary people, says SF leader
Real news has value SUBSCRIBE