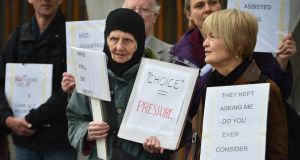 Katherine Perlo (77) campaigns against the proposed legislation to allow assisted suicide in Scotland at a rally outside the Scottish parliament today. Photograph: Jeff J Mitchell/Getty Images

Scotland yesterday voted against becoming the first part of the UK to legalise assisted suicide. The Scottish parliament at Holyrood, in Edinburgh, rejected the Assisted Suicide Bill, which would have allowed those with terminal illnesses to seek the help of doctors to end their own lives, by 82 votes to 36.

Supporters said the proposal had public backing, citing polls suggesting that almost a quarter of Scots supported legalising assisted suicide. But critics argued a change in the law would be unethical. This is the second time Scotland has ruled out assisted suicide.

Green MSP Patrick Harvie, who took the bill forward on MacDonald’s behalf, said that a “very clear” case had been made for a change in the law.

Members of the Scottish parliament were given a free vote, but ahead of yesterday’s debate Holyrood’s health committee said there were “significant flaws” in the Bill.

Health secretary Shona Robison, of the Scottish National Party, said the Bill had insufficient safeguards and that, instead, “everyone should receive high-quality palliative care. We must focus on that”.