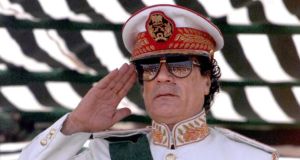 David Cameron’s intervention in Libya was carried out with no proper intelligence analysis, drifted into an unannounced goal of regime change and shirked its moral responsibility to help reconstruct the country following the fall of Muammar Gadafy, according to a scathing report by the UK’s foreign affairs select committee.

The failures led to the country becoming a failed state on the verge of all-out civil war, the report adds.

The report, the product of a parliamentary equivalent of the Chilcot inquiry into the Iraq war, closely echoes the criticisms widely made of Tony Blair’s intervention in Iraq, and may yet come to be as damaging to the foreign policy legacy of Mr Cameron, who resigned as British prime minister in June.

It concurs with Barack Obama’s assessment that the intervention was “a s*** show”, and repeats the US president’s claim France and Britain lost interest in Libya after Gadafy was overthrown.

The findings are likely to be seized on by Donald Trump, who has tried to undermine Hillary Clinton’s foreign policy credentials by repeatedly condemning her handling of the Libyan intervention in 2011, when she was US secretary of state.

Libya is currently mired in political and economic chaos with competing factions fighting for control of the key oil terminals and no nationwide support for the UN-recognised government based in Tripoli. Tens of thousands of refugees are entering Libya from the rest of Africa and sailing to Europe on perilous journeys.

Conservative MP Crispin Blunt, who chairs the select committee, said the original aim of the military intervention to protect Benghazi was achieved within 24 hours.

Mr Cameron has refused to give evidence to the select committee. In one of his few reflections on his major military intervention, he blamed the Libyan people for failing to take their chance of democracy. – (Guardian service)