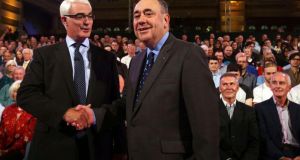 Better Together leader Alistair Darling and first minister of Scotland Alex Salmond in the Kelvingrove Art Gallery and Museum in Glasgow for the second independence debate. Photograph: David Cheskin/Reuters

In a strong performance Mr Salmond said a Yes vote in the independence referendum would give Scotland “a sovereign mandate” to negotiate a sterling currency union.

His declaration came during a TV debate with Labour’s Alistair Darling on the day before one-in-six Scots begin to receive their postal ballots for the September 18th referendum.

In the first TV debate, the Scottish National Party leader failed repeatedly to explain what he would do if Scotland could not get a currency union with England, Wales and Northern Ireland. The Conservatives, Labour and the Liberal Democrats have insisted they would not agree a currency union because it would not be in the rest of the UK’s interests. Last night, however, Mr Salmond changed the terms of debate, saying a Yes vote would give Scottish negotiators “a mandate from the people of Scotland” that would make it impossible for the rest to refuse.

Mr Darling said, however, that Mr Salmond had again failed to tell Scots what currency they would have in their pockets. “I want to know what Plan B is,” he said. Scotland under Mr Salmond’s proposal faced having to use sterling without Bank of England backing – in the same way that Panama uses the dollar, he said.

Highlights of the Scottish independence debate

However, he would not say which of the other two options would be his second choice, refusing to hobble himself before entering what would be 18 months of negotiations.

“I’ve heard of one-trick ponies,” an increasingly confident first minister jeered, saying that Mr Darling’s charges “had been rethreaded” from the first debate.

The two men clashed over the future of the National Health Service, a major plank of the Yes, Scotland campaign since the first debate.

Scotland has operational control of the NHS, Mr Salmond said, but he argued that privatisation of English services would inevitably see Scotland’s health funding cut.

Mr Darling said the Yes campaign was exploiting the NHS to scare Scots and there was evidence that the charges were striking home with voters.

He pointed out that NHS funding had increased every year under Labour, but also in every year since the Conservatives and the Liberal Democrats took over in 2010.

“I believe we would be taking a huge risk that we don’t need to take up,” said Mr Darling, adding that an independent Scotland would face a £6 billion “black hole”.

Mr Salmond scored significantly when he demanded to know what job-creating powers would be transferred to the Scottish government if voters voted No on September 18th. Mr Darling struggled, mentioning the works programme, a scheme for the unemployed. Mr Salmond won loud cheers when he described the scheme as “poverty jobs”.

Eight thousand jobs would disappear if the Trident nuclear missile arsenal was removed from Faslane, said Mr Darling. “We accept that Trident can’t be removed immediately,” said Mr Salmond, adding that the SNP government had proposed a 5½-year transfer.