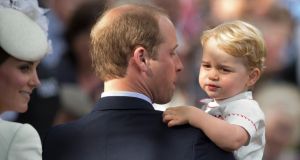 The Duke and Duchess of Cambridge photographed with Prince George (with permission) at Princess Charlotte’s christening at the Church of St Mary Magdalene in Sandringham, Norfolk. File photograph: Matt Dunham/PA Wire

Kensington Palace has accused paparazzi photographers of harassing Prince George, saying the royal toddler had become their “number one target” and accusing them of going to “extreme lengths” to get pictures of him.

In an unusually strongly worded open letter, Jason Knauf, the communications secretary of Prince William and his wife Kate Middleton, the Duke and Duchess of Cambridge, said the tactics used by some photographers were creating a “very real security risk”.

He said their actions, which included using other children to draw Prince George into view in playgrounds, had left William and Kate “concerned about their ability to provide a childhood for Prince George and Princess Charlotte that is free from harassment and surveillance”.

The hard-hitting letter detailed a series of incidents involving paparazzi ,including one last week when a photographer set up a “hide” in his car with sheets and supplies of food and drink as he staked out a play area.

Other incidents included photographers pursuing cars leaving family homes, surveillance of the Berkshire home of the duchess’s parents, Carole and Michael Middleton; hiding in dunes to take photos of Prince George playing with his grandmother, and hiding on private property in fields and woodland around the duke and duchess’s home in Norfolk.

In the letter, Mr Knauf said: “It is of course upsetting that such tactics - reminiscent as they are of past surveillance by groups intent on doing more than capturing images - are being deployed to profit from the image of a two-year-old boy.

“In a heightened security environment such tactics are a risk to all involved.

“The worry is that it will not always be possible to quickly distinguish between someone taking photos and someone intending to do more immediate harm.”

The letter said that although most media outlets would not use images of Prince George taken in this way, “a handful of international media titles” were willing to pay for them.

Mr Knauf said: “All of this has left the Duke and Duchess concerned about their ability to provide a childhood for Prince George and Princess Charlotte that is free from harassment and surveillance.

“They know that almost all parents love to share photos of their children and they themselves enjoy doing so.

“But they know every parent would object to anyone - particularly strangers - taking photos of their children without their permission.

“Every parent would understand their deep unease at only learning they had been followed and watched days later when photographs emerged.

“The duke and duchess are of course very fortunate to have private homes where photographers cannot capture images of their children.

“But they feel strongly that both Prince George and Princess Charlotte should not grow up exclusively behind palace gates and in walled gardens.

“They want both children to be free to play in public and semi-public spaces with other children without being photographed.”

In the letter, Mr Knauf said the royal couple had “expressed their gratitude to British media organisations for their policy of not publishing unauthorised photos of their children”.

He added: “They are pleased also that almost all reputable publications throughout the Commonwealth - in particular Australia, Canada, and New Zealand - and in other major media markets like the United States have adopted a similar position.”

He said the couple “have been delighted to share official photographs of Prince George and Princess Charlotte in recent months to thank the public for the thousands of kind messages of support they have received.

“News photographers have had several recent opportunities to take photos of the family and these will be a regular occurrence as both children get older.”

But he added: “Despite this, paparazzi photographers are going to increasingly extreme lengths to observe and monitor Prince George’s movements and covertly capture images of him to sell to the handful of international media titles still willing to pay for them.”

He went on: “It is clear that while paparazzi are always keen to capture images of any senior member of the royal family, Prince George is currently their number one target.

“We have made the decision to discuss these issues now as the incidents are becoming more frequent and the tactics more alarming. A line has been crossed and any further escalation in tactics would represent a very real security risk.”

Royal officials have issued similar statements in the past but have rarely gone into such detail.

Legal action has also been taken to curb the actions of paparazzi and the magazines which use their pictures, for example after topless photos of the duchess on holiday in France appeared in 2012.

In another case, when the royal couple believed their son had been harassed by a photographer during a trip with his nanny to Battersea Park last autumn they asked, through their lawyers, for the individual to stop “following” the toddler prince.

Mr Knauf said the palace was continuing to take such legal action.

But he added: “We are aware that many people who read and enjoy the publications that fuel the market for unauthorised photos of children do not know about the unacceptable circumstances behind what are often lovely images.

“The use of these photos is usually dressed up with fun, positive language about the ‘cute’, ‘adorable’ photos and happy write ups about the family. We feel readers deserve to understand the tactics deployed to obtain these pictures.

“We hope a public discussion of these issues will help all publishers of unauthorised photos of children to understand the power they hold to starve this disturbing activity of funding.”

The issue of paparazzi harassment is a particularly sensitive one for Prince William as his mother Diana died in a car crash in Paris while being pursued by photographers.

Commenting on the letter, Anne Marie-O’Leary, editor-in-chief of parenting site Netmums, said: “The royals may be public servants for the UK, but they still have a right to a private life, especially where their children are concerned.

“Prince William grew up in the shadow of his mother’s death and the question of whether that was linked to paparazzi behaviour, so it’s natural he will want to do all he can to shield his own children from their worst excesses.”

She added: “Photographers pursuing other children to lure Prince George into sight is despicable behaviour.

“William and Kate have been open and modern about sharing a number of pictures of both Charlotte and George on social media and, while they are still so young, this is more than sufficient.