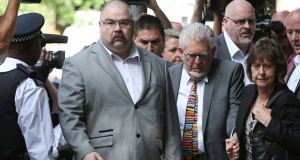 Entertainer Rolf Harris (2nd R) walks with his niece Jenny (R) as he arrives for sentencing at Southwark Crown Court in London today. The entertainer will not face a trial over allegations he downloaded sexual images of children. Photograph: Paul Hackett/Reuters.

Convicted paedophile Rolf Harris will not stand trial over allegations that he downloaded sexual images of children, prosecutors said today.

Prosecutor Sasha Wass QC told Southwark Crown Court: “In the light of the 12 unanimous convictions on the counts that Mr Harris faced, the Crown prosecution Service has decided that it is no longer in the public interest to proceed with a trial on these four charges.”

Prosecutors had claimed that the 84-year-old had 33 such photographs in a much larger collection of thousands of adult pornographic images.

But Harris’s legal team told Mr Justice Sweeney in previously unreportable legal argument that the models in the photographs were over 18, according to their identity documents provided by website bosses in the Ukraine.

Prosecutors claimed he had looked at a site called “teeny tiny girlfriends” and accessed a picture of a girl who was “extremely young in appearance”.

The prosecution tried to use a witness called Geoff Cooper, who claimed that in 1978 or 1979 Harris was showing around naked pictures of children at the canteen at Radio Clyde in Glasgow, but his evidence was ruled inadmissible.

Expert opinion gathered by both sides disagreed over whether the images were of underage girls, with the prosecution claiming one was of a child under 13.

This was denied by the defence, which maintained that all the models were adults and that the word “teen” could refer to someone of 18 or 19 years of age.

As the counts were debated during legal argument, Ms Wass said: “ If it was an accident, it appears to be an accident he had a number of times.”

Prosecutors alleged that he deleted the images because he knew they were illegal, but again the defence denied this, and said that according to the Internet Watch Foundation the websites were not known for putting up illegal pictures.

The veteran performer was charged with four counts of accessing indecent images by police, but he never entered pleas to them in court. During the legal argument, prosecutors suggested they might bring five charges against Harris.

Harris made a note in his diary about how to delete material from his computer, which he had owned since October 2010 before it was seized by police in November 2012, after seeking advice from a friend.

“4) press delete under heading below history, make sure all boxes ticked.”

A second note on another page said: “Kind girls safari; go to private browsing, go to button with black guy silhouette for privacy.”

In total 24 images found in the “allocated” memory of the computer were alleged to be illegal, and another nine that were found in an “unallocated” area, where deleted files were stored.

The defence argued that the charges should be thrown out after the identity cards were provided by the website companies, and prosecutors eventually decided not to pursue the counts.