Remain side deserved to lose campaign based on dishonesty 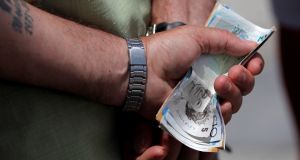 A man holds sterling notes as he waits to exchange them for euro at an exchange office in Gibraltar on Friday. The euro has changed the nature of European integration in the most profound ways. Photograph: Jon Nazca/Reuters

I advocated a Remain vote but there is something in me that welcomes the outcome of the UK’s EU referendum. While I continue to believe that the case for European integration is overwhelming, I have to accept that this case was simply not made in the campaign. And if you are constitutionally incapable of defending your case, you deserve to lose.

The case for Remain in the UK boiled down to an intellectually dishonest claim that Britain would be worse off economically otherwise. It was backed by the near-consensual agreement of macroeconomists who, despite the many insights they have to offer, were guilty of overreach.

The failures of macroeconomic models in the past few decades have been monumental. Worse still, the profession has done nothing of substance to mend its ways. The fear-based Remain campaign was the pinnacle of the profession’s intellectual arrogance. Politically, the reliance on a campaign based on economic fears constituted a monumental misjudgment. The British electorate rejected the fear argument, and rightly so.

But beyond the tactical issues, the fundamental problem of the Remain proposition is that Britain left the EU a long time ago. The Remain argument was indeed a hard one to defend. The divorce proceedings started in the early 1990s, during the time of the Maastricht treaty, when John Major, then Conservative prime minister, declared “game, set and match” when he negotiated an opt-out from monetary union.

Gordon Brown, as chancellor of the exchequer, was influential in Britain’s decision to exercise the opt-out. Tony Blair, then Labour prime minister, yielded reluctantly but later defended the decision. David Cameron was elected Conservative leader after giving a Eurosceptic speech to a Tory party conference. If you are a genuine supporter of EU integration, you do not need enemies with friends like these. This was not really a contest between Leave and Remain. It was a choice between two variants of Euroscepticism.

The referendum outcome reflects a much overlooked aspect of the political economy of the modern EU: it is not sustainable for a member state of the EU to be part of the single market but permanently not part of the euro zone.

The euro has changed the nature of European integration in the most profound ways. Nobody can pretend any longer that the EU is a common market. I am not talking about member states that are not yet ready to join the euro – or even about member states that leave their intentions couched in some constructive ambiguity. Britain is different because not only did it formally exercise the opt-out but also because both government and opposition have consistently stated their intention of never joining the euro.

The unsustainability of a position outside the euro zone but inside the EU is neither formal nor legal but political. The creation of the euro created a disconnect between the debates in the euro zone and the UK. Soon after, interests started to diverge. Alienation set in. Euroscepticism spread.

Even the single market is no longer a force for unity but division. The euro zone also needs further integration of the single market. It needs a banking union. It needs a common labour market. Britain needs neither. Britain’s interest in market integration was mainly to foster its specific commercial interests, such as those of the City of London as the euro zone’s offshore financial centre. As a national economic strategy, this can hardly be a sustainable proposition. And it is not acceptable for the other member states.

What is going to happen to the EU now? I am torn between fear of disintegration and a hope that Brexit might catapult the EU towards solving some of its problems. It is possible, just possible, that the Brexit vote might drive the rest of the EU member states towards decisions they should have taken 10 years ago, such as the establishment of a fiscal union and a proper banking union. If not, the euro zone will crumble. And the EU will lose much of its political life force, even if it formally remains in place.

I fear that they might be tempted to follow their political instinct to do something cosmetic or superficial, such as a promise to step up co-operation on foreign and security policy, but without any real political changes. This will solve nothing and will be as ineffective as an economic fear campaign.

Danger lies ahead for Britain and Europe. I am relatively optimistic that Britain will eventually adjust to its new position. I am less optimistic about the rest of Europe, given the appalling political leadership in virtually all the large countries. They now have what is probably a final opportunity to solve the problem - or face very unpleasant consequences.