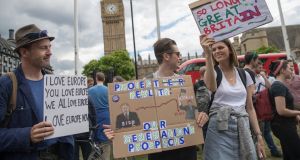 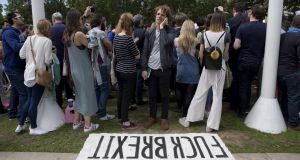 At 11.30am on Saturday, protesters gather on Parliament Square on front of the UK Houses of Parliament under a banner declaring “Fuck Brexit. ”

The organiser of the “Fuck Brexit Rally”, 24-year-old Billie Porter, is a television presenter and journalist and she has never done anything like this before. “I never felt qualified to,” she says. “Maybe that’s the problem. My generation thought the older people had things under control.”

Porter was at a wedding on the evening of the referendum and she and her friends watched the count on their phones, getting more and more dejected.

The rally was conceived “in anger” on the drive back to London. “The referendum should never have happened,” she says. “I think lots of people were asked to make a decision they weren’t equipped to make.”

By midday there are a couple of hundred people facing parliament holding signs that say things like “Love not Gove” and “Lied to by Boris with the Good Hair.”

Rachel Parker, a teacher, is wearing a home-made T-shirt that says “RIP UK. Killed 23.06.16.” She is livid. “I can’t believe that standing in front of this statue of Churchill that we’ve decided to break up the EU and the UK. What a narrow-minded little England mindset…. I feel like my European rights have been stolen. I’ve never felt so detached from the British people.”

Her brother, Steve Parker, is worried about xenophobia and the economy but also about his own family. “My ex-wife is French and we have three children,” he says. “She never applied for British citizenship. I don’t know what will happen with her. Will she be worried about her rights here? Will she choose to stay here?”

Dan, a young systems developer, has “always shied away from politics” but the referendum politicised him. He thinks most people didn’t know what they were for voting for. In fact, he nearly voted “Leave” himself, “as a protest vote against the Tories. I’m very glad I didn’t, because then I’d be a hypocrite for being here today.”

Does he know others who voted Leave in protest? “A fair few,” he says.

“I didn’t agree with this from the start,” he says. “A referendum like this just gives people like Farage a stage to come onto.”

And the outcome? “Years of uncertainty. There will be financial consequences for years to come. And there will be a lot of anger... Farage has already said the £350 million he said was going to Europe wouldn’t go to the NHS [as the campaign had claimed]. They’ve also said immigration won’t fall. The Leave voters are going to realise that they’ve been lied to.”

At this point a crowd of protesters, press photographers and curious tourists gather around Billie Porter and she invites people to take her loud hailer and say what they feel.

People get up one-by-one and talk from the heart about inclusivity, xenophobia, their respect for immigrants, the fact they are themselves immigrants, how the referendum affects younger people, the fact they don’t recognise their own country. It feels cathartic, though it’s hard to hear everyone.

Everyone is applauded, except for two long-haired men holding cans of beer who are booed. Why were they booed? “I said I voted ‘out’ to give a bloody nose to MI5,” one of them, Tom Palmer, explains. “Then I gave it all that about how the EU is a fascist super state.”

As it’s difficult to hear, I wander around and talk to people. Devon woman Miranda Broadhead was planning to walk the moors today, “but I felt so downhearted I needed to do something and so I came in here.” She looks around sadly. “I thought there’d be more people.”

An ex-navy man named Andy Eakens thinks people have totally misunderstood the immigration issue. He says that the demographics of Europe mean that there will soon be too few young people. He thinks “we should have a tourist office in north Africa explaining to people how to get here.”

He also thinks that the world’s environmental issues require the kind of “benevolent autocracy” that only a united Europe can provide. Now he’s worried about racism and the effects of Brexit on his business. “If it affects me that much I’ll move to Dublin,” he says.

A pink-haired psychology student named CJ Rock says she thinks her generation were “too complacent” about the referendum.” She and her friends never really thought the country would choose to Leave. “I feel like the world took a dark turn overnight.”

She, like most of the people here, has signed an online petition asking for a second referendum. “I don’t know if that will happen,” she says. “The leave side will say it’s undemocratic but people were scared into voting leave. They were lied to.”