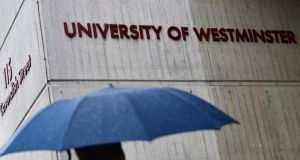 A University of Westminster campus building in central London. Isis militant ‘Jihadi John’ has been named in the media as Mohammed Emwazi, a computer programming graduate from the university. Photograph: Toby Melville/Reuters

For several years the university where the man reported to be “Jihadi John” is said to have studied has been dogged by accusations that it has been infiltrated by Muslim extremists.

The Islamic State (Isis) militant has been named in the media as Mohammed Emwazi, who studied computer programming at the University of Westminster.

Students of the university today attacked the decision to allow extremists with homophobic and sexist views to speak at the institution.

They also claimed non-Muslims and moderate members of the Islamic faith were being discriminated against.

LGBT society members are said to feel so “unwelcome” at their own university that they have their meetings off campus in public cafés.

They said the apparent unmasking of “Jihadi John” should be a “wake-up call” for the university to crack down on speakers with bigoted views.

Writing on Twitter, Avinash Tharoor said: “I studied at the University of Westminster, where Mohammed Emwazi studied.

“Extremist students and visitors consistently [were] given a platform.

“I’d primarily blame the extremists in the student union and the University of Westminster staff allowing them to hold office.

“Discrimination against gays, non-Muslims and moderate Muslims was definitely a recurring issue from the extremists at the University of Westminster.

In 2011, around two-years after Mr Emwazi graduated, Tarik Mahri was elected student union president at the university.

Mr Mahri reportedly had links to the group Hizb ut-Tahrir, which advocates for the establishment of an Islamic state.

Jamal Achchi, who reportedly also had links to the group, was elected vice-president.

Members of the group have been accused of violence against non-Muslims, sexism and homophobia.

A second-year law student at the university who asked to be named only as Naj said divisions still exist.

The university has postponed a talk, planned for tonight, by controversial anti-gay preacher Sheikh Haitham Al-Haddad in the wake of the “Jihadi John” revelations.

Naj said: “That is the big concern - the speakers who are being invited.

“Al-Haddad is quite homophobic and came out and said he supports female genital mutilation.

“The LGBT society feel displaced - they don’t meet within the campus and go to cafés outside the university because they don’t feel welcome.

“You can support freedom of speech, but at the same time the university needs to create a balance.

“The revelations about ‘Jihadi John’ should be a wake-up call. The university should have done more to crack down on the speakers being invited.”

In a statement, the university said: “If these allegations are true, we are shocked and sickened.”