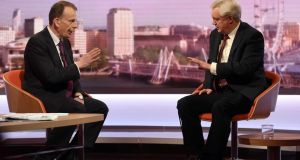 MPs will vote on Monday on two amendments to a Bill authorising the start of formal Brexit negotiations, a move that would clear the way for Theresa May to trigger article 50 of the Lisbon Treaty as early as Tuesday. Brexit secretary David Davis urged them to reject the changes approved by peers last week, which would guarantee the rights of EU citizens now living in Britain and give parliament a vote on the final exit deal.

David Davis said that the amendments would bind the prime minister’s hands in the negotiations but promised that MPs would be allowed to vote on the final agreement.

He said, however, that such a vote would be a choice between the deal Ms May negotiates and a British exit from the EU with no deal at all because there would be no time to return to the negotiating table. “There is a limited time on this. We didn’t choose the timetable – it’s a two-year time limit on article 50. So there’ll be a limit to what you can do,” he told the BBC’s Andrew Marr.

“Secondly, what we can’t have is either House of Parliament reversing the decision for the British people. They haven’t got a veto – what does it mean otherwise? I’m sure there’ll be votes throughout this process – there’ll be a vote on the deal we strike, it will be a meaningful vote in the sense that they accept it or not.”

The House of Commons foreign affairs committee on Sunday warned that the government had not made adequate contingency plans for the possibility that the negotiations would end in failure.

The cross-party committee said in a report that the consequences of crashing out of the EU without a deal risked serious consequences, risked dire consequences, including the sudden reintroduction of a hard Border between Northern Ireland and the Republic.

“If the UK leaves the EU with no deal in place, it will also exit the EU’s customs union. This means that even if the UK and Ireland were to maintain complete free movement of people within the UK/Ireland Common Travel Area, there would have to be some form of customs checking arrangement put into place immediately.

The sudden imposition of a customs border would be difficult, if not impossible, to reconcile with the desire to maintain a “seamless and frictionless” border with Ireland,” the committee said.

The report cited a submission from the Bar Council warning that a light-touch customs regime would be difficult to achieve if, in the wake of an unplanned Brexit, trade between Ireland and Northern Ireland were conducted on World Trade Organisation terms, with tariffs of up to 40 per cent on products regularly traded in both directions.

International trade secretary Liam Fox said on Sunday that leaving the EU without a deal would be bad for both Britain and its European partners. But foreign secretary Boris Johnson told ITV’s Robert Peston that, while he expected the negotiations to produce a satisfactory agreement, it would be “perfectly okay” for Britain to leave without a deal.

“I don’t think that the consequences of no deal are by any means as apocalyptic as some people like to pretend, and actually what we have seen in the budget from Philip Hammond last week are preparations for Britain over the next few years,” he said.

A handful of Conservative rebels are expected to join Labour, the Scottish National Party and the Liberal Democrats on Monday in backing the Lords’ amendments.

The government is confident of victory, however, and peers have said they will not seek to delay the legislation any further. If the prime minister triggers article 50 by the middle of this week, the European Council will respond within two days with draft negotiating guidelines, which would be put before EU leaders at a special summit on April 6th. The negotiations would be conducted on the EU side by the European Commission, under the guidance of the European Council.