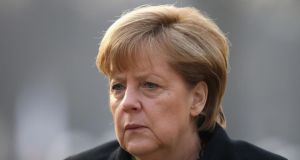 German chancellor Angela Merkel said Margaret Thatcher would be remembered not as a “female politician” but as someone who blazed a trail for women in politics. Photograph: Sean Gallup/Getty Images

German chancellor Angela Merkel paid tribute yesterday to Margaret Thatcher as an “extraordinary leader in the global politics of her time”.

Dr Merkel, often compared to Thatcher when she took office in 2005, said the former Conservative leader would be remembered not as a “female politician” but as someone who blazed a trail for women in politics.

“As she took the highest democratic offices as a woman before that was common, she set an example for many,” said Dr Merkel.


Overcoming division
The German leader, raised in East Germany, praised Thatcher’s recognition of “the power of the freedom movements of eastern Europe early on”. But Dr Merkel chose her words carefully, praising Thatcher’s “contribution to overcoming division in Europe” – not in Germany.

Mrs Thatcher’s suspicion of German unification is well documented. Nine days after the Berlin Wall fell in 1989, ex-chancellor Helmut Kohl recalled a dinner in Paris where, as he wrote in his memoirs, Mrs Thatcher “laid into me in a big way”. For months Mrs Thatcher favoured a decade-long transition to a democratic but independent East Germany.

“We beat the Germans twice and now they’re back,” she told a December meeting of European leaders, according to Dr Kohl.

Yesterday, Dr Kohl buried the hatchet, calling Mrs Thatcher a “great woman [for whom] there was no substitute”. “She was one of the most exceptionally gifted prime ministers there ever was,” he said.