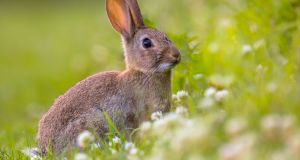 Jim Hamilton said the team hiked eight hours up a mountain and when they reached their camp they find cages with rabbits in them. Coach Vern Cotter told the players they would be cooking the rabbits for dinner, Hamilton said

Members of the Scottish rugby team were made to kill rabbits for their dinner as part of a training excercise in France before the 2015 Rugby World Cup, a player has claimed.

Speaking on a podcast retired forward Jim Hamilton said the team hiked eight hours up a mountain and when they reached their camp they found cages with rabbits in them. Coach Vern Cotter told the players they would be cooking the rabbits for dinner, Hamilton said. He later dampened down claims on Twitter saying he got “carried away”.

“I swear to God, he’s sat there in full outdoor hunter gear – big jumper, walking boots, he’s got a knife. And he says, ‘right lads, we’ve got four rabbits. We’re cooking them for dinner. Who doesn’t want to kill the rabbits?” Hamilton told the RugbyPod podcast.

Four team members said they did not want to kill the rabbits, said Hamilton. Then Cotter, according to Hamilton, told the four that they would be the ones to do the killing.

A member of the army who was present at the camp then removed one of the rabbits, a “bunny rabbit” rather than a wild one, according to Hamilton, and showed the others how to kill it.

“So he’s there and he’s swinging this rabbit around with one hand. And the next thing he slams it on the floor. I’m not joking, the thing’s eyes popped out of its head. And then he cuts its throat and the other three, the boys had to go and kill them.”

“Anyway, needless to say the rabbits didn’t taste that succulent, they were a bit tough.”

Scottish Rugby said neither it nor Cotter would be making any comment and referred The Irish Times to Hamilton’s Twitter feed.

Hamilton dampened down the claim saying he got “carried away”. In two tweets, Hamilton said: “Guys, my comments on recent podcast shouldn’t be taken seriously. Got carried away, certainly no rabbit slamming or orders to kill!