May apologises over official response to Grenfell Tower disaster

Britain's Queen Elizabeth says that Brexit is 'a priority' for the UK government as she delivers a speech to parliament. Video: Reuters 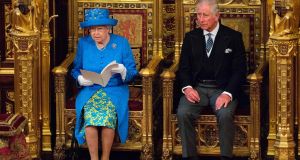 Britain’s Queen Elizabeth II sits alongside her son Britain’s Prince Charles, Prince of Wales as she delivers the Queen’s Speech during the State Opening of Parliament in the Houses of Parliament in London on June 21st, 2017. Photograph: Arthur Edwards/AFP/Getty Images

Theresa May has apologised for the inadequacy of the official response to last week’s fire at Grenfell Tower in west London, admitting that support offered to survivors in the hours after the disaster was not good enough.

The British prime minister told MPs that people had been left without a roof over their head, without basic information about what had happened and not knowing where to find help.

“That was a failure of the state, local and national, to help people when they needed it most. As prime minister, I apologise for that failure and as prime minister, I’ve taken responsibility for doing what we can to put things right,” she said.

Ms May was speaking during a debate on the Queen’s Speech following the state opening of Parliament, which marks the start of the legislative session.

The speech outlined the government’s plan to introduce eight bills to facilitate Brexit over the next two years, including measures to allow for the end of free movement of people from the European Union and a departure from the customs union. The speech, delivered by Queen Elizabeth but written by the government, did not include the most controversial pledges in the Conservatives’ election manifesto. And it made clear that the parliamentary session will be dominated by preparations for Brexit.

“My government’s priority is to secure the best possible deal as the country leaves the European Union. My ministers are committed to working with Parliament, the devolved administrations, business and others to build the widest consensus on the country’s future outside the European Union,” the queen said.

The Conservatives and the Democratic Unionist Party (DUP) have yet to agree a confidence and supply arrangement which would give Ms May a small majority in the House of Commons. The contents of the Queen’s Speech are, however, understood to have been agreed in advance with the DUP.

The legislative programme for a rare, two-year parliamentary session includes measures to tackle domestic violence and to set up a commission to tackle extremism. But it omits key parts of the manifesto Ms May campaigned on, including the so-called dementia tax, which would have made old people pay for the cost of their social care until the value of their assets was reduced to £100,000.

The Queen’s Speech also omitted any mention of controversial promises to offer a vote on lifting the ban on foxhunting and to bring back grammar schools.

The biggest piece of Brexit-related legislation will be the Repeal Bill which will transfer EU laws into British law when Britain leaves the EU in March 2019. Other bills will provide for Britain to have its own customs regime when it leaves the EU and to operate an independent trade policy. An immigration bill will abolish EU free movement rules after Brexit and “make the migration of EU nationals and their family members subject to relevant UK law”.

The speech did not mention Donald Trump’s state visit to Britain, fuelling speculation that the visit has been postponed indefinitely.

The state opening was a slimmed-down ceremony, without the customary procession from Buckingham Palace and with the queen wearing a hat rather than a crown. It was scaled back because the snap election meant that it was scheduled too close to other major ceremonial events.

Prince Philip was unable to attend because he was admitted to hospital on Tuesday night with an infection and his place next to the queen was taken by Prince Charles.

Labour leader Jeremy Corbyn dismissed the Queen’s Speech as a threadbare legislative programme from a government that had run out of ideas.

“This is a government without a majority, without a mandate, without a serious legislative programme, led by a prime minister who has lost her political authority, and is struggling to stitch together a deal to stay in office. We will use every opportunity to vote down government policies that failed to win public support and we will use every opportunity to win support for our programme,” he said.