The Royal College of Surgeons’ council is against the move 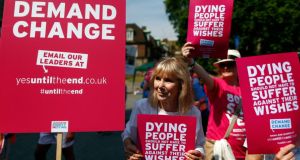 Now 84, Roger Elton, the 2nd Baron Elton, spoke quietly in the House of Lords yesterday, during a passionate debate on legislation that would, if passed, allow the terminally-ill to get help to end their lives.

Given the advanced years of so many in the Lords, death is not an abstract event that lies far-off in the distance, but rather an occurrence that could have to be faced at any time.

Under the legislation, the terminally-ill who can be “reasonably expected” to die within six months would be helped to kill themselves if they wanted that – if two doctors say they are fit to decide. However, they must take the fatal medicines themselves.

During a passionate debate, peers divided sharply. For some, the legislation promised an escape from horrible, protracted deaths. Others believed it would create not a right to die, but a duty not to live.

Proposing the change, former Labour lord chancellor, Lord Charles Falconer said some people “wish to end their life rather than struggle for the last few months, weeks, days or hours”.

Sometimes, the better-off go to the Dignitas clinic in Zurich. But the majority of those who wish to do so “hoard pills or put a plastic bag over their head when they are alone”, dying earlier than they need to because they fear involving others.

Many in the Lords have changed their views, including former Archbishop of Canterbury, George Carey.

“Let me tell you what my theology is all about. It is about accompanying those very sick and dying people to that place where they feel most abandoned, where they are already experiencing their own Calvary or Golgotha,” he said, to murmurs of praise.

“There is a myth that our lives are so tragic or painful that we must want to end them. Just this week I was told, ‘You must have wanted to kill yourself many times in your life’. No, I have not,” she declared.

The freedom to choose was not enjoyed equally by all, she said: “We have to recognise that not everyone’s motives are altruistic; not everyone has a caring family. People can be coerced.”

Doctors are divided. The Royal College of Surgeons’ council is against the move; so, too, the British Medical Association, believing doctors should have no role to play. The British Medical Journal, however, backs it.

Last year, Baroness Julia Neuberger, a senior Jewish rabbi, investigated concerns about Britain’s palliative care services: “It is important that we found no evidence that it had been used to hasten people’s deaths.

“It was nevertheless clear that many older people, who often have complex physical and emotional needs, were frightened that it might be used in that way. The sense of vulnerability of older people, particularly in hospital, emerged time and again.”

Judges, not doctors, should rule on the capacity of a person to decide if the pain had become too much, or if life had become too unbearable, but also to investigate if a patient was “being pressurised by relatives or others”, she said.

Despite the doubts, peers voted to send the legislation for greater study at committee stage but Lord Thomas Elder warned that “a long and complicated process [lay] ahead”, not a quick-fix solution.

Finishing, Baron Elton mused on the brevity of his own future existence: “What I look forward to – my interest is limited because I shall not live that long – is the world in which my children and grandchildren will live.”

Life has taught him that “love is what makes the world go round; it is what makes it possible to live here and rejoice”, but a Christian faith had taught him to see death not as “a pit but as a door; not as an end but as a beginning of something far more glorious”.