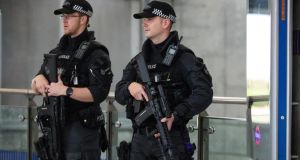 Armed police will continue to patrol the streets and the transport network in London. Photograph: Jack Taylor/Getty Images

Britain’s terror threat level has been reduced from critical to severe, meaning an attack is no longer regarded as imminent, after police arrested two men in connection with Friday’s bomb attack on a London commuter train. As searches continued in houses in Surrey and near Heathrow airport, assistant police commissioner Mark Rowley said detectives were getting a clearer picture of how the bomb was prepared.

“There is still much more to do but this greater clarity and this progress has led JTAC [the joint terrorism analysis centre] to come to the judgment that an attack is no longer imminent,” he said.

Police arrested an 18-year-old man in the departure area of Dover port on Saturday morning, and a 21-year-old man later that day. As both men remained in custody on Sunday night, police continued to search addresses in Stanwell and in Sunbury-on-Thames.

Neighbours said the house in Sunbury-on-Thames was owned by Ronald Jones (88) and his wife, Penelope (71), who have fostered hundreds of children over a period of almost 40 years. The couple were awarded an MBE in 2010 for services to children.

Almost 30 people were injured when a bomb, placed in a bucket inside a supermarket bag, partially detonated on a crowded District Line train at Parson’s Green in west London on Friday morning. All but one of those injured had been released from hospital on Sunday night.

Neil Basu, the Metropolitan Police’s senior national co-ordinator for counter terrorism, said investigators had an open mind about how many people were involved in planning and carrying out the attack.

“At this stage we are keeping an open mind around whether more than one person is responsible for the attack and we are still pursuing numerous lines of enquiry and at a great pace. The Metropolitan Police and its partners across the Counter Terrorism Policing Network have been working around the clock and through the night to identify, locate and arrest those responsible for this cowardly crime,” he said.

Mr Rowley said that, although the reduced threat level meant that the role of armed soldiers in policing duties would be phased out over the next week, armed police would continue to patrol the streets and the transport network.

“For practical and precautionary reasons we made the decision that the increased resources will continue for the beginning of this week. So the public will still see that high level of policing presence; some armed, some unarmed,” he said.

“The military support we have had in place under Operation Temperer will start to phase out as we move through the coming week. There are detailed and well-rehearsed plans in place to ensure a smooth transition from Operation Temperer, and military personnel will remain at readiness to deploy in support of the police should future security situations require. I want to stress however, that specialist teams, well-rehearsed at dealing with major incidents, continue to provide a strong visible presence throughout the capital and across the UK.”