London terror attack: what we know so far

Attackers drove a van at high speed into pedestrians on London Bridge before stabbing people in the nearby Borough Market area of bars and restaurants on Saturday in what British authorities described as terrorist incidents. Video: REUTERS 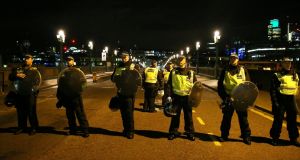 ––Seven people have been killed during attacks in two closely connected areas of London on Saturday night which police have described as terrorist incidents’.

––Three suspected attackers have also been shot dead by police.

––The incidents took place on London Bridge and in nearby Borough Market.

––There were multiple casualties in addition to the fatalities with London Ambulance Service saying they have taken at least 48 people to five hospitals in the capital.

––A British Transport Police officer was stabbed in the face as he responded to the incident at London Bridge.

––Cressida Dick, the Met police commissioner, has said the incident is under control but that police officers will conduct a thorough search of the area to make sure all are accounted for. She said she did not yet know the identities of the suspects.

-The Met have arrested 12 people in Barking in East London. On Sunday morning, police raided a block of flats in the area where at least one of the suspects is thought to have lived.

––Theresa May said there is “a new trend in the threat we face” with terrorism breeding terrorism. Speaking outside Number 10 after a meeting of Cobra, the government’s emergency committee, she said: “It is time to say enough is enough.” May added that there must be changes on four fronts: first, people who are drawn to Islamic extremism must be persuaded that Western values are superior. Second, there must be a clamp down on the “safe spaces” on the internet where terrorism breeds. Third, she called for action at home where extremism may be tolerated. Fourth, she proposed a review of counter-terrorism strategy and laws, and suggested longer sentences for some offences.

––May confirmed that the general election will go ahead on Thursday as planned.

––The Joint Terrorism Analysis Centre (JTAC) at MI5 headquarters have recommended not to raise the official threat level from severe to critical, suggesting they believe no more terrorists are at large.

––A statement from the office of Emmanuel Macron, president of France, confirmed French citizens were among the injured and condemned “an abominable and cowardly attack against our free society”.

––At least one Australian citizen has been injured, according to the prime minister Malcolm Turnbull, and there are reports of a second.

––Guy’s and St Thomas’ NHS Foundation hospital said it had been put “on lockdown” to keep patients, relatives and staff safe.

––The first report of an incident was of a white van ploughing into pedestrians on London Bridge at about 10.08pm.

––Witnesses said the van swerved on to the pavement. Police say the van continued onto Borough Market where three attackers emerged and carried out multiple stabbings.

––Pictures have been circulating showing a suspect on the ground in the market; he appears to have canisters strapped to his body. Police say those canisters were part of a hoax suicide vest. The terrorists’ use of fake bomb vests was designed to “sow panic and fear,” the PM said.

––Authorities responded to a third incident, a stabbing at Vauxhall, but this was not connected to the events around London Bridge.

––Labour, the Conservatives, the Liberal Democrats and the SNP have suspended national campaigning for the general election. Ukip, however, has not. Its leader Paul Nuttall said it was because “this is precisely what the extremists would want us to do”.

––Theresa May, the prime minster, has called the events a “terrible incident’’ that is being treated as a “potential act of terrorism’’.

––London mayor Sadiq Khan condemned the “barbaric” and “horrific” attack as “deliberate and cowardly”. He said there would be a heavy police presence throughout central London today.

––Guests at some hotels in the vicinity of the attacks were evacuated after the attacks.

––Security services have carried out a number of controlled explosions.