Lockerbie moves on after quarter of a century 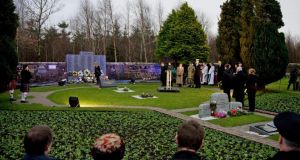 Relatives and friends place flowers at the memorial during a ceremony at Dryfesdale cemetery in Lockerbie. Photograph: EPA/Brian Stewart 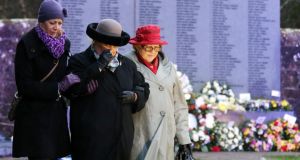 Jane Schultz (centre), mother of Thomas Schultz, after laying flowers at the wall of remembrance after a memorial service to mark the 25th anniversary of the Lockerbie bombing at the memorial site at Dryfesdale cemetery in Lockerbie. Photograph: Andrew Milligan/PA Wire

Today it pleads for the chance to move on, to be able to lay out its own future rather than forever be marked by the events of December 21st, 1988. Equally it wants to remain, as it has been for quarter of a century, a haven for those who come to mourn those lost when Pan Am flight 103 fell from the sky at 7.03pm that day.

On Saturday morning, volunteers struggled in the blustery weather to erect a Christmas tree outside the town’s Holy Trinity Catholic church.

Inside, Canon Patrick Keegans, whose house was the only one in Sherwood Crescent undamaged by debris from flight 103, battled to deal with his memories.

“Lockerbie, the name of this good town, has become synonymous with the murder of innocent people preparing for Christmas. Today we remember them,” he said, his voice catching.

“But even more so, Lockerbie become a name synonymous with love. From the instant [flight 103] fell into the surrounding countryside there was an instant outpouring of love that flowed constantly and continues.”

The explosion on the Clipper Maid of the Seas claimed the lives of 260 people. Eleven more perished in the fireballs the debris caused on the ground. Lockerbie’s reputation was made with small, heartaching acts of kindness. In the weeks afterwards, searchers found items of clothing belonging to the aircraft’s passengers. Each piece was washed, pressed and returned, where possible, to loved ones. “Who would have thought of doing that?” says Kelly Rodoski.

Rodoski had never been to Lockerbie until Thursday. Yet she has lived with the disaster each day since 1988. Back then she was a first-year student at Syracuse University in New York, which lost 35 students. She has worked for the university since then, helping to organise the lives of the 35 “remembrance scholars” and two Lockerbie students chosen each year in memory of the tragedy.

Tribute
Syracuse organises, every year, a tribute to its dead, and did so again on Saturday. Each year, however, as the distance between 1988 and now grows longer, it gets just that little bit harder.

“None of our students now, or for a few years since, was born then,” Rodoski said.

“Back then we had never really been touched by terrorism in the United States. Now they are growing up in a post-9/11 world.”

Two men faced charges over Lockerbie. Only one, Abdelbaset al-Megrahi, was convicted. He was released, controversially, on medical grounds in 2009 by the Scottish government.

Shortly after lunch, those who still mourn or carry the scars of grief were ferried in a line of buses to Dryfesdale cemetery, where a polished monument lists the names of the dead. Everywhere there were attempts by families to seek the individual remembrance of a loved one, to bring the person’s name forward from the litany of loss.

Karen Elizabeth Noonan, “mourned by Patrick, Nancy and Dawn”, is commemorated in a simple plaque erected in front of one of the trees planted in the years since.

Episcopalian minister John MacLeod, his voice stentorian in the wind, wondered what more could be “said about Lockerbie that has not already been said”. But the world could remember, he said, “that it was 25 years since certain men chose to set aside their humanity to destroy the lives of 270 people”.

“Not only those lives but the families, those who survived, this community, people who suffer each day, who live with the ever-present reality of that dreadful act,” he added.

Lockerbie, he said, “would never tire” of offering “what comfort and healing we can in the touch of friendship from those who have also experienced suffering”.

Evil, he said, had “burst through like a pustule on the skin”. Flight 103 had been one outbreak, 9/11 was another, “Bali, Madrid, fusilier Lee Rigby, the roll call goes on.”

Faced with such evil, he said, people sought “a response within themselves which is not the instant and the visceral, fleetingly satisfying but the considered and the measured”.

“We seek to be governed and to apply justice and the rule of law, tempered with mercy. For our desire is to build rather than to destroy; to co-operate rather than disrupt.”

Craig Lynes, from the US transportation security administration, spoke for the US government, though his words sounded strangely official, lifeless in an atmosphere that required empathy.

“Collaboration with our international partners enables us to stay one step ahead of those who are determined to destroy our way of life,” he said.

“It is with pride that we declare once again our unshakeable commitment to continue the fight against terrorism. We owe that to each of you.”

Partly sheltered by yew trees, two pipers played bagpipes, the plaintive keening of the instruments appropriate, surrounded as it was by so much quiet shedding of tears.

People came in turn to lay flowers. First the dignitaries: Salmond, Dumfries and Galloway lord lieutenant Jean Tulloch and others.

Then it was the turn of the families. As they walked slowly to the memorial the pipers played Flowers of the Forest, Amazing Grace, My Home and the haunting Highland Cathedral.

Flowers and bouquets
The driving rain had by then returned. Within minutes the flowers and bouquets had formed a gently rising mound against the memorial. Each relative found his or her own way to remember. Some stood quietly, careful not to stay too long lest they delay those behind. Jane Schultz, from Pennsylvania, who lost her son Thomas, gently kissed the tablet she had erected on the wall beside the monument.

“It’s very sad but it is a very important anniversary and I would not want to be anywhere else. To be here in Lockerbie to honour my son, to pay respect to him,” she said.

Like so many others over the past 25 years, Schultz had travelled the winding three miles of road from Lockerbie to Tundergarth, where the aircraft’s nose cone had landed in a field.

“I had the privilege of standing right where he took his last breath the other day. As a mother that meant a lot,” she said.

During a long day of remembrance, Lockerbie came together for a final time for an ecumenical service in the Church of Scotland’s Dryfesdale parish church at 6.30pm. Standing in the church’s raised pulpit, Rector Sandy Stoddart said Lockerbie “had been a blessing to many” over years, “a place that had held them in a warm embrace”.

‘Onward’
He added: “But the town that has the motto ‘Onward’ has moved on. Not away from our connection with the tragedy, not away from our responsibility to remember and care.

“But people die,” he said. He paused. “Move away.” He paused again. “Move on.” He paused once more. “Businesses close, new ones open. Children are born, lives are lived.”

Reflecting the feelings of most locals, he said: “There is a frustration among many in the town that we seem not to be allowed to move on.” The media, and perhaps others, wanted pictures of tears, he said, “a more powerful image than the straight faces of people getting on with life” every day.

Leaving the church, some of the congregation to the parish hall for “tea and buns”, in the words of Catholic priest Fr Jim Hayes. Others went home to houses lit up for Christmas, with children anxiously awaiting Christmas Day.

Lockerbie has performed its duty and behaved honourably, and it will quietly offer hospitality and comfort to people each time they come – people who once were strangers. But the days of the major commemorations are over.