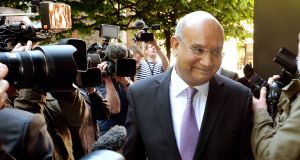 British Labour MP Keith Vaz is reportedly standing down as chairman of the House of Commons home affairs committee amid allegations he paid for the services of male escorts. File photograph: John Stillwell/PA Wire

Labour MP Keith Vaz is reportedly standing down as chairman of the influential House of Commons home affairs committee after a newspaper alleged he paid for the services of male escorts.

The Sunday Mirror alleged Mr Vaz met the men at his flat in northwest London on August 27th.

In a statement, Mr Vaz said: “It is deeply disturbing that a national newspaper should have paid individuals to have acted in this way.

“I have referred these allegations to my solicitor Mark Stephens of Howard Kennedy, who will consider them carefully and advise me accordingly.”

In a separate statement issued to the Mail on Sunday, the Leicester East MP said: “I am genuinely sorry for the hurt and distress that has been caused by my actions, in particular to my wife and children.

“I will be informing the committee on Tuesday of my intention to stand aside from chairing the sessions of the committee with immediate effect.”

Naz Shah, a member of the home affairs committee, told Sky News she had spoken to Mr Vaz, adding “he has done the right thing” by standing aside.

A Labour Party spokeswoman told the Press Association: “Keith Vaz has issued a statement on this matter.

“As with all departmental select committees, Keith was elected to the chair of the home affairs select committee by the House of Commons, and his position is a matter for him and the House.”

The home affairs committee is currently probing a review of prostitution laws.

“I haven’t read the whole of the allegations and therefore it’s difficult to comment on them,” he told Sky News.

“As I understand it . . . he will stand aside from the chairmanship of the select committee.

“Given the areas of which the committee is responsible, that does seem to me to be a sensible course of action. I wouldn’t want to comment beyond that.”

Labour shadow health secretary Diane Abbott said this was a “dreadful” experience for Mr Vaz, and his wife and children.

“I have known Keith for over 30 years, I think this must be a dreadful time for him, and his family - his wife and his two children. And I would rather not comment,” she told Sky News.