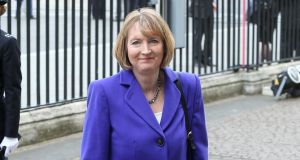 Former shadow chief secretary to the treasury Chris Leslie has been promoted to shadow chancellor, replacing Ed Balls, who lost his Morley and Outwood seat by 422 votes on Thursday.

Hilary Benn moves from the communities and local government brief to become shadow foreign secretary, replacing Douglas Alexander, who was one of the 39 Labour MPs swept away in the Scottish National Party (SNP) landslide north of the border.

Replacing Mr Benn as shadow communities secretary is former shadow housing minister Emma Reynolds. Ms Reynolds is one of 14 women out of the 29 MPs who are either members of Ms Harman’s shadow cabinet or will attend its meetings - almost a 50/50 gender balance.

He replaces Sadiq Khan, who wrote to Ms Harman to say that “after a period of reflection I have decided that I should step down from serving in the shadow cabinet”.

Mr Khan, a close ally of Ed Miliband who is expected to put himself forward as Labour candidate for next year’s London mayoral election, said: “This is an opportunity for others to take on a leading role as we start the fightback for 2020.

“Another five years of a Tory government means more misery and suffering for my Tooting constituents and millions of others around London and our country. After taking advice from family, friends and constituents, I will decide how best I can contribute to the fight over the coming months and years.”

All four are considered likely contenders in the forthcoming leadership battle.

Ms Harman is replaced in her previous role as shadow culture, media and sport secretary by Chris Bryant, a fierce critic of the press over phone-hacking who has held the arts brief since last December.

Ms Harman unveiled her team as Labour prepared for a contest to replace Mr Miliband as leader, which is expected to be concluded before the party’s annual conference in Brighton in September.

The party’s ruling national executive committee (NEC) is due to meet this week to finalise a timetable for the election, as well as a deadline for new members to gain voting rights.

One backbencher tipped as a possible leader has ruled himself out of the race with a stinging rebuke to the approach taken by Mr Miliband, which he said “failed to tap into people’s aspirations with a sufficiently optimistic vision”.

Dan Jarvis - the ex-paratrooper seen as an ideal fresh start candidate by many within the party - said he wanted to help rebuild the party but was putting his children before his immediate political career.

A slew of senior figures, including former prime minister Tony Blair, spent the weekend criticising a campaign that saw the party wiped out in Scotland, make no progress elsewhere and let David Cameron back into No 10 with a House of Commons majority.

Mr Umunna said he would “play the fullest part I can”, while Mr Hunt said he was “definitely thinking about” running for Labour leader - although both avoided direct questions about their intentions.

The parliamentary Labour Party will start to regroup at Westminster under the interim leadership of Ms Harman, who has said she will step down once a new leader and deputy have been elected.

In his statement, Mr Jarvis did not explicitly rule out standing for the deputy role.

Tottenham MP David Lammy ruled himself out of the leadership contest, saying he was concentrating on his bid to be selected as candidate for London mayor.

Mr Lammy told BBC2’s Daily Politics: “I am not going to be standing for the Labour leadership because I think we need a leader that can win back the Midlands and [that] understands Scotland, as well as the South.

“My strengths are in London and the South and therefore I want to be the Labour candidate for mayor.”

Absent from Ms Harman’s shadow cabinet were Jon Cruddas, who was drafted in by Mr Miliband to conduct a policy review and oversee the writing of the 2015 manifesto, and Lord Stewart Wood, a close adviser to the former leader who sat on the frontbench as shadow minister without portfolio.