Kenny’s track record could land him a key EU position

Opinion: Taoiseach’s obvious enjoyment of his job is a key aspect of creating confidence 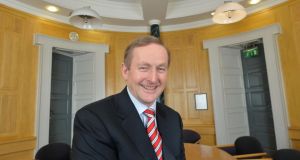 After three years of office in a time of austerity, Enda Kenny is in remarkably good political shape as he faces this weekend’s Fine Gael Ardfheis in Dublin.

When the Coalition took power in March 2011, Kenny and his Ministers braced themselves for inevitable unpopularity in the light of the tough policies they knew were required to keep the country on the road to economic recovery.

Yet despite all the hard decisions taken by the Coalition, Fine Gael is holding up well in the opinion polls and should be capable of a reasonable showing at the European and local elections in May.

Kenny’s performance in the Taoiseach’s office has been the crucial factor in establishing the Coalition’s credibility and getting broad public acceptance of the need to endure tough times now in the long-term interests of the country.

A key element of Kenny’s success has been his infectious optimism. That helped to persuade a deeply disillusioned electorate that all of the problems facing the country in 2011 could be overcome in time but that patience was required.

What comes across to the electorate is that he actually enjoys the job of being Taoiseach. That has been a critical factor in creating the air of confidence that was so necessary, particularly in the early days of the Coalition.

His mantra about making Ireland the best small country in the world in which to do business may have become a cliche at home, but it has worked to generate foreign direct investment on his numerous trips abroad.


Economic focus
In his message to delegates at the ardfheis, he emphasises that Fine Gael and its Labour partners in government remain totally committed to achieving the promised economic recovery. He underlines that this is the key message they should carry to the doorsteps in the forthcoming local and European elections.

The unrelenting focus on the economy has so far paid political as well as economic dividends for the Government. After the disastrous collapse of the economy, it appears that voters are prepared to ignore almost all other issues as long as the recovery remains on track.

Despite the unremitting political and media focus on the Garda controversy over the past month or so, it appears to have made little or no impact on party support. Hence Kenny’s injunction to his supporters to focus on the economy when they go to the doorsteps in May.

Those elections will be a sterner test of political support than opinion polls. If Fine Gael can hold about 30 per cent of the vote in elections which are tailor-made for Opposition parties and Independents, it will feel confident that it really can hold on to power in the next general election.

It is naturally assumed in Fine Gael that Kenny will lead the party into the next general election as there is nobody remotely interested in challenging his leadership. But what if he is offered one of the tempting big EU positions due to be filled this year?

While Kenny is still underestimated and even belittled by some domestic commentators, his international reputation has soared since he took office. He is now being widely spoken about in Brussels and other European capitals as a potential candidate for one of the key EU positions up for grabs this year.

There is an undoubted attraction for him in becoming the first Fine Gael leader to win two successive terms as Taoiseach, and the odds on him achieving that are looking good. To succeed in doing something that eluded all his predecessors, including John Bruton, Garret FitzGerald and Liam Cosgrave, would cap Kenny’s career. It would copper fasten his achievement of having led Fine Gael to become the biggest party in the State for the first time in its history.

However, if he is seriously offered the post of president of the European Council in the autumn, he would have to be strongly tempted, particularly as the position is one that would suit his political talents far better than the presidency of the commission.

British prime minister David Cameron has made it clear he would back Kenny. That could be a negative given the UK’s unpopularity with many other EU states, but the other side of the coin is they might regard the Taoiseach as the ideal person to cut a deal to keep Britain in the EU.

A lot will depend on what German chancellor Angela Merkel has to say on the subject. She has good relations with Kenny, who she has known for a decade through meetings of the European Peoples’ Party of which Fine Gael is a member.


Merkel meeting
Merkel will be in Dublin next week along with a number of other EPP prime ministers for their annual convention. They are due to select the EPP candidate for the commission president’s post.

No serving prime minister has so far put himself or herself forward for the post as that would represent domestic political suicide with no guarantee of success on the EU stage. However, the decision will not be a binding one and the EPP could ultimately decide on a serving prime minister when the elections are over.

Kenny is hardly likely to feature in the shake-up for the commission post, but the European Council presidency due to be filled later in the year would be an altogether more attractive proposition for him.

How he will react if that post is offered only time will tell, but the fact that he is even being talked about as a realistic contender is enough to be going on with.