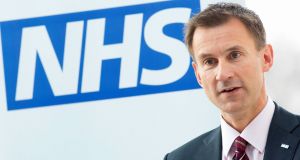 Jeremy Hunt: his handling of the dispute was discribed as “the political equivalent of pouring oil on to a blazing fire”. Photograph: Neil Hall/PA Wire

Hospitals in England have cancelled more than 12,500 operations and over 110,000 outpatient appointments today and tomorrow as junior doctors go on all-out strike for the first time in the 68-year history of the National Health Service (NHS).

The strike, which will affect all hospital departments including emergency services, became all but inevitable after health secretary Jeremy Hunt rejected a last-minute compromise proposed by an all-party group of MPs.

The strike, which does not affect Scotland, Wales or Northern Ireland, is in protest against Mr Hunt’s decision to impose a new contract on 55,000 junior doctors, a category that includes all hospital doctors below the level of consultant.

The contract, which aims to make more doctors available at weekends, promises a 13.5 per cent increase in basic pay, but abolishes premium payments for daytime shifts on Saturdays and cuts payments for the rest of the weekend.

“The NHS is busting a gut to keep the public safe. But we should not lose sight of the underlying reason for this dispute, namely this government’s determination to be the first country in the world to offer a proper patient-focused seven-day health service,” Mr Hunt told MPs yesterday.

Labour’s shadow health secretary Heidi Alexander said Mr Hunt was to blame for the dispute, describing his handling of it as “the political equivalent of pouring oil on to a blazing fire”. She said he had a thrown away a chance to avert the strike when he rejected the cross-party proposal to pilot the new contract on a limited basis before rolling it out across the whole service.

Earlier, the heads of 14 royal colleges of medicine warned the government it was putting the entire health service at risk by refusing to negotiate over the doctors’ contract.

In a letter to prime minister David Cameron, they urged him to intervene to prevent the unprecedented walkout.

“You have spoken many times about your commitment to the NHS. In our view, as leaders of the medical profession, the ongoing impasse in the dispute between government and junior doctors poses a significant threat to our whole healthcare system by demoralising a group of staff on whom the future of the NHS depends,” they said.

“At this 11th hour, we call upon you to intervene, bring both parties back to the negotiating table, end this damaging standoff, and initiate an honest debate about the serious difficulties facing UK health services.”