Hague warns of devolution for England 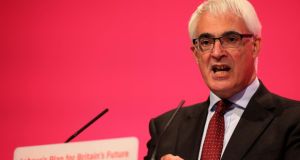 The Conservatives will make demands for greater powers for English MPs over English laws a central part of next year’s British general election – unless Labour agrees to changes, William Hague has warned.

Responding to Labour’s concerns about the loss of Scottish Labour MPs from Commons votes, Mr Hague said that voters would have the last word “if other parties make it impossible to deal with this”.

Meanwhile, Mr Cameron, along with Labour’s Ed Miliband and the Liberal Democrats’ Nick Clegg, has been called before a House of Commons inquiry to flesh out the devolution plans.

The Conservatives, Labour and the Liberal Democrats each laid out their own proposals for Scotland months before the referendum – but the three signed a common vow last week. However, no accord exists on the detail.

The Conservatives were more ambitious than Labour, which is divided. Scottish Labour wants significantly more devolution, but Scottish Commons MPs and the party leadership in London are less enthused.

Criticising Mr Salmond for suggesting that independence could happen by a parliamentary vote rather than by a referendum, Mr Darling said the first minister seemed to believe that “he might be able to seize power”.

However, Labour is deeply concerned about its future in Scotland, following a defeat for the No campaign in each of the Glasgow constituencies it holds and in other one-time party strongholds.

Scottish Labour leader Johann Lamont said Labour must reflect deeply on its mistakes: “We allowed disappointment to become despair and to ferment into nationalism,” said Ms Lamont, whose own position is increasingly questioned. “We must never ever allow that to happen again.”

The bilious relationship between Labour and the SNP has worsened, if anything, Ms Lamont made clear. “The people of Scotland have rejected the false offer of the nationalists: the deceitful contortion that we could have a Reaganomic tax regime and Scandinavian welfare state.”

Meanwhile, Len McCluskey, leader of the UK’s biggest union, Unite, said the political establishment, “including our own party, has had a near-death experience” in Scotland.

However, Mr McCluskey is out of favour because Unite stood on the sidelines during the referendum, rather than offering support to Labour’s No campaign.

The SNP reported that 17,000 people had joined it since last Thursday, bringing its membership to more than 42,000 – partly on the back of anger that devolution promises will not be honoured.