Despite political backing from the Conservatives, drilling is highly unpopular in local communities 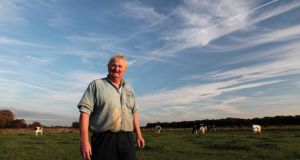 Lancashire dairy farmer Andrew Pemberton: “If for any reason my water became contaminated, my business would be ruined and my livelihood would be destroyed.” Photograph: Steve Morgan/Greenpeace/PA

Greenpeace has warned companies drilling for shale gas in England and Wales that they will face immediate legal action if they try to drill underneath landowners’ lands and properties without permission.

Under English and Welsh law, natural resources such as oil, gold and gas are the property of the crown, but a 2010 UK supreme court judgment ruled that drilling without permission to get them amounts to trespass.

However, one of Greenpeace’s lawyers was unable to say if the example being set in England and Wales could be followed in Northern Ireland – where fracking is controversial in Co Fermanagh in particular.

Greenpeace now says that it expects “thousands of people” to join “the legal block, creating a patchwork of ‘no go’ areas for the fracking industry”.

Despite strong political backing from the Conservatives, who believe fracking will play a crucial role in supplying the UK’s gas needs in coming decades, the drilling is highly unpopular in local communities.

“I’m supplying milk to 3,000 households, and if for any reason my water became contaminated, my business would be ruined and my livelihood would be destroyed,” said Andrew Pemberton, a Lancashire dairy farmer. “So, too, would the livelihoods of the 16 families who work for me. Fracking is dangerous and short-sighted. We should be keeping this gas in the ground,” he told a Greenpeace-organised meeting in Lancashire yesterday.

The legal precedent was confirmed three years ago in a case brought by Mohamed Al Fayed, the former owner of luxury London store Harrods, after the High Court in London ruled that a company drilling for oil under his Surrey estate had trespassed.

Exploration companies want British laws to be changed, so that permission from landowners does not have to be sought; but, even if this is politically possible, it could take several years to get the legislation through parliament.

‘Ransom strips’
Even more significantly, the companies would be at risk in the meantime of being blocked by individuals who buy tiny pieces of land – so-called “ransom strips” – which they would then use to stop drilling.

Clearly unhappy with Greenpeace’s action, the UK Onshore Operators Group – representing the industry – said its announcement had been “extremely misleading”, since drilling taking place over a mile below ground does not impact on landowners.