Biggs caught after 1963 heist but escaped jail, spending 36 years on the run

Ronnie Biggs, the British criminal known for his role in the Great Train Robbery of 1963, has died at the age of 84. Biggs gained notoriety 50 years ago as one of a gang that stopped a Royal Mail night train and made off with £2.6 million. 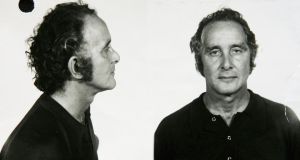 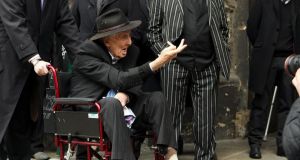 Ronnie Biggs gestures to the waiting press at the funeral of Bruce Reynolds, the mastermind behind the Great Train Robbery of 1963. Biggs died this morning. Photograph: Sean Dempsey/PA Wire 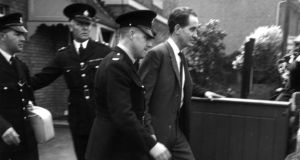 Biggs lived as a fugitive for 35 years after his escape from jail while serving a 30 year sentence for the infamous £2.6 million robbery. Photograph: Evening Standard/Getty Images 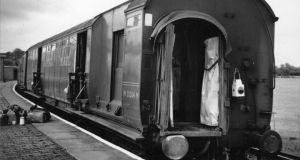 British criminal Ronnie Biggs, who won worldwide notoriety for his role in the Great Train Robbery and for escaping from prison and living the high life in Rio de Janeiro, has died.

Biggs, who was 84, was being cared for at the Carlton Court Care Home in East Barnet, North London, died early today. He had become increasingly frail in recent years after suffering several strokes. He was last seen in public at the funeral of fellow Great Train Robber Bruce Reynolds in March.

Speaking earlier this year Biggs said he was proud to have been part of the gang behind the robbery. On August 8th, 1963, the robbers, masterminded by Reynolds, stopped the Glasgow-Euston overnight mail train and carried out the biggest robbery of its time.

Biggs escaped from prison in 1965 and spent 36 years on the run before finally being arrested and jailed in 2001.

He was released from prison on compassionate grounds in 2009 due to ill health and subsequently said he had few regrets about the crime that made him a household name.

Biggs, who could not speak due to his strokes and communicated through a spelling board, said: ”If you want to ask me if I have any regrets about being one of the train robbers, my answer is, ‘No’.

”I will go further: I am proud to have been one of them. I am equally happy to be described as the ‘tea-boy’ or ‘The Brain’.

”I was there that August night and that is what counts. I am one of the few witnesses — living or dead — to what was ‘The Crime of the Century’.”

He did admit to some regrets. ”It is regrettable, as I have said many times, that the train driver was injured,” he said.

The train driver Jack Mills, who was coshed, reportedly by Biggs, never fully recovered from the ordeal and died a few years later.

”All have paid a price for our collective involvement in the robbery. A very heavy price, in the case of my family.

Ronald Arthur ”Ronnie” Biggs played a minor role in the robbery, in which the gang escaped with £2.6 million, equivalent to about £40 million (€47.3 million) today.

Anthony Delano, who wrote a book about the robbery, told Sky News Biggs was an “idiot”.

“He was a small time south London crook who nobody wanted on the team because he was a weak link.” But his life as a fugitive after escaping from prison gained him notoriety.

He was given a 30-year sentence in 1964, but he escaped after 15 months by fleeing over the walls of London’s Wandsworth prison in April 1965.

After having plastic surgery, he lived as a fugitive for 36 years first in Australia then Brazil, where he fathered a son Michael, who became the key to him being allowed to stay in the country and not face extradition.

Biggs’s money ran out and he traded on his notoriety to scrape a living.

Michael, who now lives in England, was not immediately available today but had left a message on his phone saying: “For obvious reasons I’m not taking many calls today.”

His health deteriorated in 2001 and he returned to the UK voluntarily mainly to get the better care available in prison and on the NHS.He was freed in 2009 on ”compassionate grounds” by then Justice Secretary Jack Straw, who said he was not expected to recover.

Biggs was last seen in public at the funeral of gang leader Reynolds in London in March when he made a ‘V’ sign at the waiting press.

Biggs was among 200 well-wishers who paid tribute to Reynolds, who died just months before the 50th anniversary of the infamous heist.

The Twitter account ronniebiggsnews, which publicises Biggs’ website and autobiography, said: “Sadly we lost Ron during the night. As always, his timing was perfect to the end. Keep him and his family in your thoughts.” Peter Rayner, former chief operating officer of British Rail, has been critical of Ronnie Biggs in the past but expressed sympathy for his family.

He said: “My view is that whilst I was — and am — critical of the Great Train Robbers and the heroes’ welcome they got, especially in light of the death of Jack Mills, my sympathies go out to his family and I would not wish to speak further on the subject.”

Biggs’s death comes on the day BBC1 is to screen a new film about the robbery, in which his role is played by Jack Gordon. Tonight’s film The Great Train Robbery: A Robber’s Tale will go ahead as scheduled and this morning there were no plans to mark the death, other than during news bulletins.

The story is seen through the eyes of gang member Bruce Reynolds, and a further film to be shown tomorrow — A Copper’s Tale — will examine the efforts to bring the criminals to justice from the perspective of Tommy Butler, the detective leading the hunt for them.