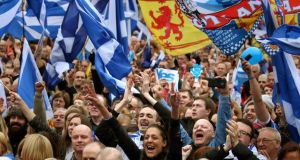 In the days leading up to last month’s Scottish referendum, George Square in Glasgow was the unofficial headquarters of the vivacious grassroots independence movement. Each night, thousands of supporters waving Saltires and Yes banners transformed this normally staid collection of statues and grey asphalt into a carnival.

In bright sunshine yesterday afternoon, George Square was once again a sea of Scottish flags and placards. Despite Scots voting to stay in the union, an estimated 6,000 people attended one of the largest pro-independence rallies since last month’s vote.

The five-hour long “Hope Over Fear” rally was organised by controversial Glaswegian socialist leader Tommy Sheridan and featured some 30 speakers including Scottish National Party and Green politicians and anti-poverty campaigners. A gravelly-voiced Sheridan – convicted of perjury in 2010 in one of the most sensational trials in Scottish legal history – told independence supporters their campaign had only reached “the end of the beginning”.

“I wanted to show that I’m still here. I still care,” said Jamie Lee, a personal banking consultant from the Gorbals estate in Glasgow. “There are still so many people who support independence even if it was a no. We are here showing we still care about it, we still want it.”

Among the crowd were families with strollers, socialist activists selling newspapers and hip 20-somethings and “Still Yes” T-shirts. There were “45” banners – 45 per cent of Scots voted Yes – and the stylised Guy Fawkes masks popularised by the Anonymous movement.

“People still feel an affinity with Yes. They’ve not lost the hope and aspirations,” said Danny Boyle (28) from Edinburgh.

In the wake of last month’s referendum, the Smith Commission was launched to propose more powers for the devolved Scottish parliament.

The SNP has called for the maximum devolution possible within the UK, the so-called “devo max” option. Like many on the independence left, Boyle expressed scepticism about reform within the UK. “It’s back to politics as normal at Westminster,” he said. “You can already see that what the political parties are offering in the Smith Commission is nowhere near enough, for Yes voters but for lots of Nos, too.”

“When I first walked in [to George Square] there was a feeling of sadness but the whole idea is being here and getting together and moving forward in a positive way.”

Not everyone is ready to leave behind last month’s referendum. Some independence supporters have claimed that the September 18th vote was fixed. US activist Naomi Wolf was among the speakers yesterday calling for a judicial review of the electoral process.

“I truly believe it was rigged. Yes won, the country voted Yes but there was no way the British government would let Scotland go,” said Ian Donnachie, an SNP member who had travelled 170 miles from Inverness for the George Square rally.