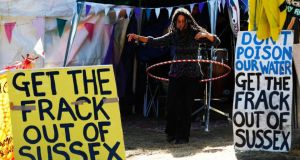 A demonstrator hula hoops among banners in the protest camp by the entrance to a site run by Cuadrilla Resources, outside the village of Balcombe in southern England. Photograph: Luke MacGregor/Reuters

Britain frequently suffers from a metropolitan virus whereby issues can linger on the margins of southeast England’s consciousness until they have a direct impact on daily lives in the home counties, particularly in London’s commuter belt.

Over the last couple of years exploration company Cuadrilla, based in Staffordshire, carried out fracking tests for shale gas in Lancashire until minor tremors on which its tests were blamed forced it to stop.

Although the story was covered in the media, Cuadrilla’s operations commanded attention down south only when the company began drilling a test bore near leafy Balcombe in Sussex on land where drilling was previously carried out in the mid-1990s.

Today, the Balcombe controversy leads news bulletins, while Reclaim the Power protestors, who never saw much point gathering in numbers in far-off Lancashire, are doing so in Sussex, along with promising so-far unspecified “direct action” in the middle of this month.

Middle ground
Usually, politicians run far from projects that excite the middle ground – that promise wealth for the few rather than the many if something is discovered and that carry risk of environmental damage.

Most Conservatives are behaving in the opposite fashion, however – chancellor of the exchequer George Osborne, for example, last month offered major tax breaks to energy companies hunting shale gas. Having looked at the US, where fracking has cut gas prices, reduced CO2 emissions and provoked confrontations with environmentalists, Osborne said shale gas will play a part in the fulfilment of Britain’s future energy needs.

The British Geological Survey recently discovered that trillions of cubic feet of shale gas lie under the Bowland basin in northwest England, though it is not clear how much could be extracted.

Even larger reserves are available in another basin, underneath Hampshire, Surrey and Sussex, though the difficulty of extracting it would be of a different order of magnitude to anything encountered in Lancashire.

The debate, depending on one’s views on the subject, is being coloured by remarks made privately by energy minister Michael Fallon that emerged into the public arena; and by remarks made in the House of Lords by Osborne’s father-in- law, David Howell.

Bruiser
Fallon, something of a political bruiser, welcomed fracking’s drift southwards. “The beauty of that – please don’t write this down – is that of course it’s underneath the commentariat. All these people writing leaders saying, ‘Why don’t they get on with shale?’ We are going to see how thick their rectory walls are, whether they like the flaring at the end of the drive,” he was quoted as saying.

He later said the remarks – believed to have been directed at Spectator columnist and former Daily Telegraph editor George Moore, who lives in a Sussex rectory and previously supported fracking – were jocose.

Margaret Thatcher’s secretary of state for energy from 1979 until 1981, Howell was derided for saying in the Lords that fracking should take place in England’s northwest because the area was “desolate”.

He compounded the insult when he sought to clarify his remarks by saying he had got mixed up and had meant to say the northeast.

He has a point, however. If fracking can be done safely it is logical it would be easier to carry out in places with low population densities, such as Lancashire, rather than in the more populous southeast.

Conservative ministers will not be short of opportunities to express their support for fracking over coming years, since a dozen of them represent constituencies where energy companies have been given exploration licences.

Local councils would have to give the nod before any such testing could begin. If the opinions in Balcombe are anything to go by, however, MPs speaking out in favour of fracking will find themselves short of local friends.

The majority in Balcombe are roundly against Cuadrilla’s operations, though most seem equally unhappy about the presence of apparently professional protesters – including many previously seen at G20, Dale Farm and Occupy London demonstrations.

Meanwhile, Conservative Cabinet office minister and local MP Francis Maude is not in good odour with many of his constituents, as he appointed Cuadrilla chairman John Browne to a post in his office.

Cuadrilla, which in Balcombe has made many of the communications mistakes typical of energy companies, is not trying to frack there – at least not during its 40 days and nights of test drilling.