Foreign spouses: ‘When in love you don’t even think about visas’ 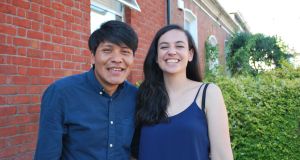 Bolivian Victor Flores and Briton Joanna Orr: The couple are living in Ireland, using the “Surinder Singh” route, whereby they live in an EU country for a time before applying for a “family permit” to enter the UK.

Five years ago, Joanna Orr sat in an internet cafe in Bolivia and wondered how she was going to bring her new husband, Bolivian man Victor Flores, back with her to the United Kingdom.

“ I started looking at what we would have to do for him to come with me and I realised that getting married wouldn’t be enough. I remember being pretty devastated,” she recalls.

Orr and Flores had met while both were working with an NGO in Bolivia. Following two years together they decided to get married and move to the UK so that Orr could study for a Masters degree.

Then life became complicated. Because of tougher immigration rules, it has become increasingly difficult for UK nationals who happen to fall in love with a person from outside the EU to bring their partner home.

One of the conditions requires a British citizen to earn £18,600 a year before they can bring a foreign-born partner to the UK to ensure that they can keep a partner without recourse to welfare benefits.

The income limit set by the now British prime minister Theresa May during her time as home secretary rises to £22,400 if the couple have a non-British child, plus £2,400 more for each additional child.

The rule has been criticised for being highly discriminatory as 41 per cent of the UK population earn below the income threshold. Women, young people, and those who live outside London are at a particular disadvantage.

The tougher rules have resulted in couples and families living separately, sometimes for years. However, the income threshold, unachievable for many, can be bypassed by taking a detour.

Known as the “Surinder Singh” route, the detour sees couples moving to another European Union country for a period. Then, they apply to enter the UK on a ‘family permit’ under EU free movement laws.

Now living in Dublin since September 2013, Orr and Flores are using the legal loophole, seeing Ireland as a pit-stop before heading finally to the UK. However, the route could disappear after the UK quits the European Union.

Carol Sinnott, a solicitor specialising in immigration law, has seen a significant rise in the volume of applications for entry to Ireland from non-EEA family members of EU citizens, particularly in 2015.

In a recent case that her firm Sinnott Solicitors took to the High Court, lawyers for Minister for Justice Frances Fitzgerald claimed that, given the surge in applications, forcing prompt decisions would cause a “collapse” in the immigration service. Numbers were said to have ballooned from 663 applications in 2013 to 10,000 in 2015, with 7,000 applications still waiting to be processed.

The case in question concerned extreme delays to an application made in July 2015 by Shabina Atif, a woman from Pakistan, for permission to enter Ireland with her British husband, Atif Mahmood. She applied for an Irish visa to make use of the Surinder Singh legal route after failing to obtain a UK spousal visa - acting on the advice of a UK-based agency, the Immigration Assistance Services (IAS).

Another couple, Rachel and Jamie, successfully applied for an Irish resident card while living in the west of Ireland. They met in New Zealand and have recently moved back to the UK to be closer to Rachel’s family. Now, they are wading through more paperwork to get Jamie’s UK resident card. The application is almost done but nothing is certain.

“When you’re in love and you want to get married you don’t even think about visas and that kind of thing,” said Rachel, who didn’t want their actual names used.

The application to the British authorities could be rejected if it seems like they moved to Ireland with the sole intention of returning to the UK.

“The (British) government has tried to make it more difficult,” said Helena Wray, Associate Professor of Law at Middlesex University and a specialist in family and spousal migration.

For example, a later application to return to the United Kingdom can be rejected if the authorities there are not convinced that the move to Ireland was genuine, but rather was an attempt to “game” the British rules.

Being employed, buying a house, joining a gym can all be used as proof of moving your “centre of life” to Ireland. Wray also advises staying for more than the minimum period of three months before applying for the family permit.

The 15-month delay to Atif’s application was so “egregious” as to breach the EU free movement directive, leading the court to order the Minister for Justice to provide a decision within six weeks on her application to join her husband in Ireland.

The married couple’s intention to ultimately move to the UK did not affect the judgment, though the ruling stated that this might be considered by “the UK authorities at a future date”.

“It was completely unacceptable for the department to ignore applicants for such inordinate periods of time, in many cases in excess of a year presumably in the hope that those applicants would simply go away,” said Sinnott following the judicial review.

Briton Lois Kapila and her US-born husband Sam Tranum, managing editor and deputy editor of the Dublin Inquirer newspaper, were not strangers to immigration papers and hurdles when they arrived to Ireland in 2013.

Having experienced immigration systems in Kyrgyzstan, where the couple met, and then the US, UK, and India, they found Ireland’s system to be relatively straightforward.

Remembering their experience, Kapila is still angry about the restrictive UK rules. Having worked as a reporter for an Indian national paper she did not meet the UK’s required income threshold. However, the couple did not want to live apart while Kapila found work in the UK.

“Judging people on how much they earn is the most ugly gross way to approach society. It’s not about whether you help someone cross the street,” she says, “it’s about money as a way of measuring somebody’s worth”.

They decided to take the Surinder Singh route, which was a barely trodden path at the time and so “there was a lot of working out” and fears about whether they would even be let into the country.

“We didn’t know anybody or anything, so our intention was to find an apartment and work for as long as it took to prove we had the EU treaty rights,” she told The Irish Times.

Sick of paperwork and begrudging the United Kingdom for making them feel unwelcome, they decided to stay in Ireland and set up the Inquirer, operating out of an office in Kilmainham.

However, it was not easy. Uncertainty around immigration status meant Tranum could not work. Kapila was held back from starting her business as they did not know if they could stay.

“So much of it is having to jump through hoops and follow rules that really restrict you and make you less able to contribute to society,” said Kapila, adding that it made them think “really short term”.

Nico Ferguson from Scotland and her Chilean husband, Joseph Abaud, would have beaten the 2012 UK rule on minimum income if they applied a few months earlier than they did.

“Whenever you make a plan, you are told, no that’s not your plan, that’s not going to work,” said Ferguson, who spent the last year studying at Trinity College, “it’s kind of tiring to be honest”.

Ferguson was working in Chile when she met her husband at a street party in a hilly seaside village near his hometown Santiago. However, Abaud had to leave Scotland just after the couple’s wedding to avoid overstaying his visa.

Reunited in Barcelona, the two spent their time frantically applying for jobs in European Union countries outside of the UK. Ferguson found a job teaching English in Dublin.

With the passage of time, Ireland is coming to feel more and more like home, particularly given the insecurity following the UK’s Brexit referendum - a result that has led the couple to put a move back to the UK on hold.

The UK’s decision to leave the European Union has thrown up more complications and uncertainty for couples residing in Ireland and hoping to return to the UK using the Surinder Singh route. Dr Wray remarked:“assuming that free movement rights go as a result of Brexit then it will be very difficult for them indeed”.

Theresa May made it clear in recent weeks she was uncompromising on the issue of free movement. “We are not leaving the European Union only to give up control of immigration again,” she said, opening the Tory conference. However, the particulars remain unconfirmed.

The difficulty is this: British citizens may no longer have rights to live in another EU state, but they may also be unable to bring their non-UK spouses to the UK. Equally, however, neither may be able to stay in Ireland.

On the morning of the referendum result in June, Tranum looked up how his wife could apply for a US Green Card: “If Lois can’t be here, I can’t be here and we’ll both have to up and move again,” he said.

In reality, neither Tranum, nor Kapila want to leave Ireland. Both feel settled here. Both intend to apply for citizenship - Ireland feels more like home.